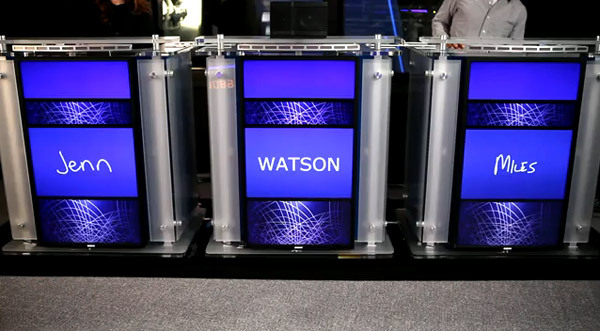 IBM's supercomputer, named Watson in honor of IBM founder Thomas J. Watson, bested star Jeopardy contestants Brad Rutter and Ken Jennings and it wasn't even close. Watson ended the day with $35,734 while the two human opponents combined for a mere $15,200.

As reported earlier, IBM has moved on from winning chess matches and is instead focusing on answering human questions. The system, which consists of ten racks of servers, does not actually listen to Alex Trebek ask the questions but is instead fed the data electronically. The system then parses the question, scans its database for potential answers, and displays how confident it is that the answer is correct. Watson successfully answered two of the game's Daily Double's - wagering an odd $6,455 the first time - and even though its confidence level was only 32% for the second question, it was successful in guessing "Baghdad."

Watson did not have the correct response for Final Jeopardy, but by that point it didn't matter as its competitors were already in the dust and Watson wisely wagered a mere $947.

The game show was produced at an IBM research center in Yorktown Heights, New York last month. Round two will be aired Wednesday, February 16th. Are we witnessing the beginning of SkyNet?