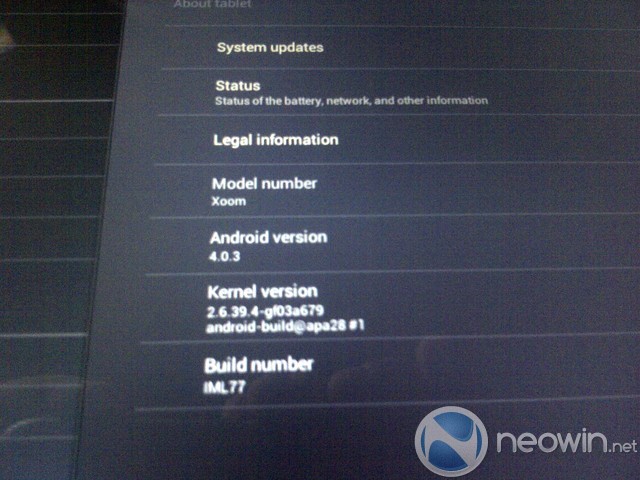 The Motorola Xoom was the first Honeycomb-based tablet on the market. It was heavily hyped and was even advertised during last year's Super Bowl. Although sales of the device have not been very good, owners of the tablet will still receive an update to Android 4, codenamed Ice Cream Sandwich. It appears that the download is available to all users via the WiFi connection and you will be prompted to update the next time you power on the tablet.

According to the system information, the version of ICS is 4.0.3, build number is IML77, and the kernel version is 2.6.39.4-gf03a679. After the upgrade, the first change you'll notice is the boot screen looks different. Instead of random honeycombs flashing around on the screen, we see random colored squares. Once the system boots, you'll notice that the font is a little different (for the better), some icons (such as the buttons in the lower left of the screen), have changed, and the old "Contacts" icon has been replaced with a "People" icon. Scrolling between screens also seems smoother with less lag, and users can now bring up the task manager and swipe the processes to the right in order to remove them, similar to how WebOS works.

While this update will probably not help improve the sales of the Xoom, especially with the Xoom 2 on the horizon, it's good to see a major update provided to tablet owners. It remains to be seen whether ICS will help "unify" Android and whether that will help developers make apps that are more portable across platforms.