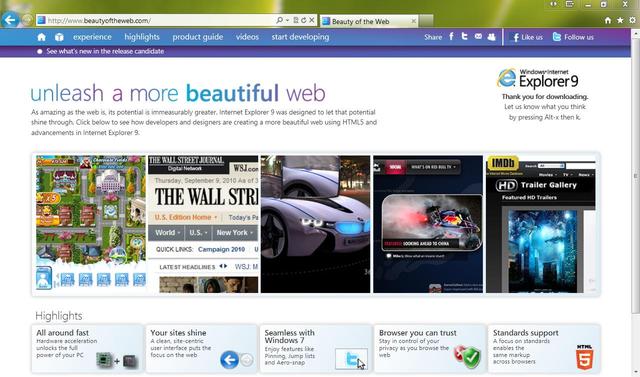 Microsoft has announced that users running the Internet Explorer 9 release candidate will automatically be upgraded to the final version when it's released.

Buried in the final lines of a February 10 blog post - and spotted by WinRumors - IE boss Dean Hachamovitch notes that those who install the RC will be bumped to the final release when it ships.

''After the final release, we will automatically update IE 9 RC users to the final build,'' he said.

That does not, however, mean users will have no choice but to upgrade - the update will be offered via Windows Update as an ''Important'' update. As with all Windows Updates, users will still have the choice to not install IE 9 final.

Starting today, those who installed the IE 9 Beta last year will also be offered an upgrade to the release candidate via Windows Update.

In preparation for the final release of IE 9 - Microsoft is yet to reveal when the finished product will ship - the company has also made available the IE 9 Automatic Update Blocker Toolkit. The toolkit allows administrators to prevent machines on their networks from automatically upgrading to IE 9 when the final version is released. Machines with the IE 9 beta or RC already installed will still upgrade to the final version, regardless of whether it has been blocked with the toolkit. Windows Server Update Services or System Center Configuration Manager customers can manage the rollout of IE 9 without using the toolkit.