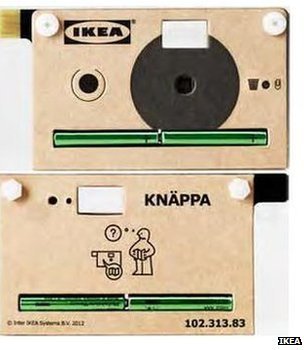 Form and function don't always go hand-in-hand. Sometimes, the two can be brought together over time. This must be Ikea's idea about their new digital camera, made almost entirely from cardboard. Above we have their new device, which the company themselves shared. It might not be a beautiful design but it definitely seems functional, following the same form factor as virtually every digital camera on the market.

As reported by the BBC, Ikea has unveiled a camera made almost entirely of cardboard. The camera can take forty photographs, and is part of the "PS at Home" campaign Ikea is running. The aim of this campaign is to convince buyers to share images of their Ikea furniture on the site's website. Unfortunately, these cameras won't be sold publicly. Called "Knappa", the cameras will be given away across the world, to consumers in selected stores. The camera was designed by Jesper Kouthoofd, and it runs on two AA batteries. A swing-out USB means that it can also be connected to a computer.

It isn't uncommon for companies to take a greener approach to their business. Buying eco-friendly goods provides a feel-good factor, which is more than enough reason to keep some people returning. Taiwanese ASUS has also pushed for more eco-friendly goods, with their 'green' laptop, and Samsung have produced the Blue Earth. The Blue Earth includes a solar panel for charging purposes, and so should be capable of existing without a charger in sunnier countries.

This is also not Ikea's first foray into the world of eco-friendly materials. Last year, the Swedish retail giant also announced a solar power project at a store in California. The store was equipped with solar panels, capable of supposedly powering 64 homes in the area for a year. The Knappa might not be available to the public, but if the device is memorable enough you could see them becoming a collector's item in the future. Just make sure you don't take them out into the rain, if you're planning to hold onto yours.