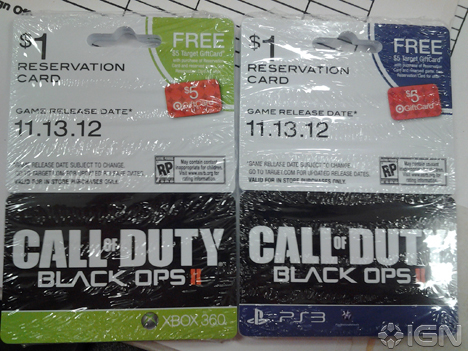 Activision may still want to tease us with both the title and the release date for the next Call of Duty game, but it appears the cat is out of the bag for both. IGN reports that a pre-order card was spotted at Target showing not just the title of the game, Call of Duty: Black Ops 2, but also its planned release date of November 13th.

While there was some doubt about the title of the next game in the hit first person shooter series (there were some promotional materials with the name "Eclipse" floating about at some GameStop locations) this would seem to confirm that Activision is sticking with a known brand name for the series' next installment. The primary developer for Black Ops 2 is likely Treyarch, who did similar duties for the first Black Ops game in 2010.

As we reported a few days ago, the official reveal trailer is going to be shown as part of an NBA playoff game telecast on Tuesday, May 1st. You can also expect even more information on Black Ops 2 to be revealed in about a month and a half during E3 2012. It's also highly rumored that the game will be set sometime in the near future.