Over the last year or so, finding graphics cards at even close to MSRPs has been difficult. And despite improving availability levels, retail pricing data suggests that GPU prices are not trending downwards by much if at all.

To add to this sad story is a new tale from Vietnam where loads of stolen Nvidia GeForce RTX GPUs belonging to AIB partner EVGA were found being sold by a major Vietnam retailer called "Nguyen Cong Computer". Nguyen Cong Computer or nguyencongpc is locally referred to as NCPC in short. 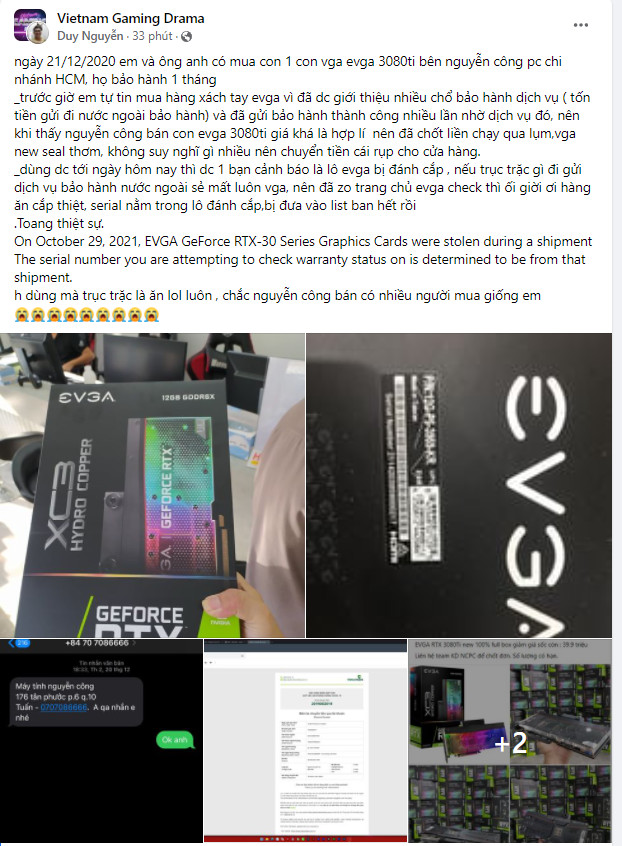 The story broke first on the Vietnam Gaming Drama Facebook group. An EVGA RTX 3080 Ti user had bought the card from the NCPC store and tried to register the product to check for warranty services. However, the user was alerted by EVGA that the serial number of the card they owned actually belonged to a shipment of GPUs that were stolen.

The story was then screenshot and posted on this new Facebook group called "VGA Siêu Rẻ VN - Chợ PC & Gaming Gear", where the response of an NCPC official was posted (machine translated to English):

The first word on behalf of NCPC I would like to extend my sincere apologies to the customers for the incident yesterday.

1. Our business is importing VGA EVGA batch of Hoang Minh company EVGA 3080Ti brand new 100% original seal. Beside Hoang Minh says hello new VGA 100% full seal and 1 month warranty. Then the KD friends sold some items to some retail customers, the rest are workers. Selling price is also cheaper than market price and also only 1 month warranty. (Before sale, there is a clear explanation of only 1 month warranty and the customer agrees to negotiate).

2. Rare time VGA so vga surf agents are plenty (buying other agents vga and sell fast surf). It's because it's just a quick surf, so you should not check the series on the Evga home page to see the warranty and the condition of the goods is unknown. (1 month warranty for entering, 1 month warranty for selling. Hoang Minh's side guarantee if there is any problem)

3. Yesterday a customer posted a post saying check series on the EVGA home page and was informed that this vga is a lost shipment of EVGA. At that time we knew the above and contacted right away.

4. We always contact Hoang Minh company and were answered by them to take full responsibility and tell us to recall the VGA lot for them.

5. It's true that we are just victims and there was no prior notice of this shipment. Whatever is our responsibility, we ask for full responsibility. First of all, we send our sincere apologies to our customers and provide the following solutions:

Hence, it seems that the stolen GPU shipment had caught the NCPC store off guard as it was unaware of the incident.

This isn't the first time such a thing has happened. Last year in November, EVGA had alerted its users of a stolen truck full of its GPUs, though that was in U.S. And earlier in April, many Nvidia CMP HX cards were caught in Hong Kong which were being smuggled.

EVGA is not an AIB officially operating in Vietnam except for distributorship and so cards like these are brought in via other channels and sources. It might also be possible that those GPUs stolen earlier during the U.S. truck incident have actually ended up here at the Vietnam NCPC store.