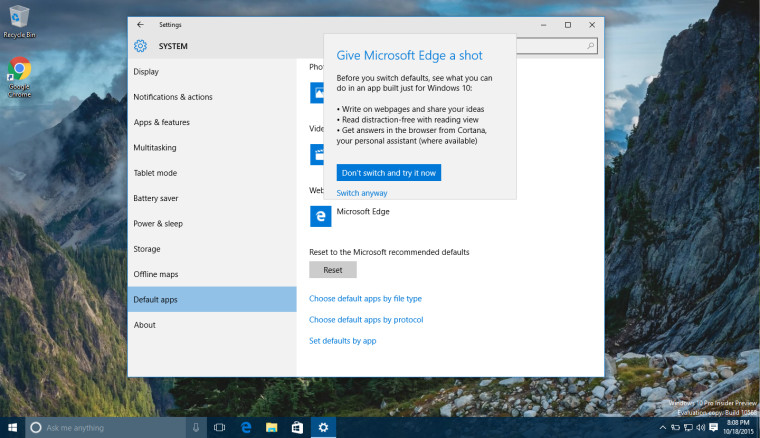 According to recent a report by Tom Warren of The Verge, the latest build of Windows 10 has introduced a new prompt as part of the Settings app that appears when users attempt to replace one of Microsoft's built-in apps as the default app with one that has been developed by a third-party.

In the example screenshot posted, when a user attempts to replace Microsoft Edge as the default web browser, the new prompt tells the user to "see what you can do in an app built just for Windows 10," and then goes on to list several features—some that are unique to Edge—in an effort to dissuade users from making the switch:

The prompt also emphasizes the option to keep Microsoft Edge as the current default browser.

While Edge is perhaps the most noteworthy of the default apps included with Windows 10, the report states that the new prompt will appear not only for Edge, but for other apps as well.

It is not known whether Microsoft will retain the prompt in future builds of the operating system, but when combined with additional features that are slated to be included, it could help to dissuade users from switching the default apps that are included with Windows. The fact that users may consider switching to alternatives should provide Microsoft with the incentive to improve its default apps by listening to user feedback.