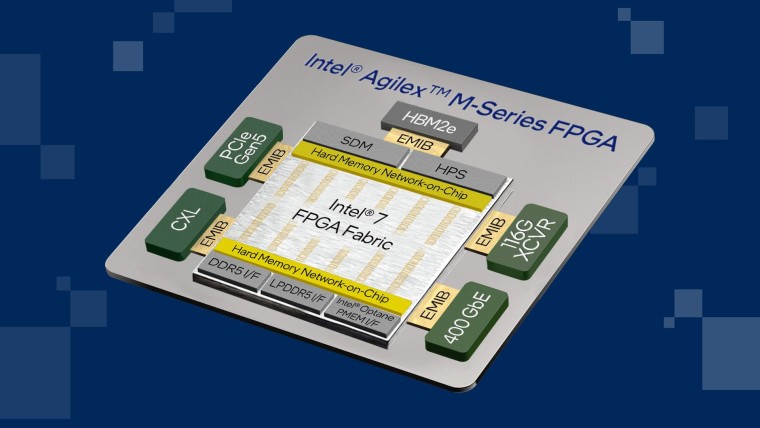 Intel has revealed its new Agilex M-Series Field Programmable Gate Arrays (FPGAs). These are based on the Intel 7 process technology. Intel claims they have the industry’s highest memory bandwidth FPGAs with in-package HBM DRAM. While these FPGAs can work on a variety of tasks such as network virtualization, and they should benefit the cryptocurrency mining community the most.

The Agilex M-Series are the first members of the Intel Agilex device family to pack High-Bandwidth Memory (HBM) RAM in the form of two in-package HBM2e DRAM stacks. They can provide up to 820GBps in memory bandwidth. This is about 60% higher than the previous generation Stratix 10 MX FPGAs. In all, the new FPGA lineup can feature up to 32GB HBM.

If a system can assimilate eight DDR5 SDRAM DIMMs, it can theoretically deliver almost 1.1TBps. The Agilex M-Series comes with a new kind of component called the Memory Network-on-Chip that "acts as a superhighway" between the FPGA's HBM2e DRAM and external DDR5 SDRAM, mentioned a blog post by Intel product marketer Sabrina Gomez.

Some of the notable features of the new Agilex M-Series FPGAs, claimed by Intel are:

The Intel Agilex Series-M is the second product optimized for cryptocurrency mining that the company has revealed within a month's time. Last month, the company revealed an Application Specific Integrated Circuit (ASIC) for this very purpose. Intel is calling the ASIC “Bonanza Mine”. Incidentally, while the ASIC is supposed to be energy-efficient, the latest FPGAs don't appear to be.

Besides cryptocurrency mining, the new FPGAs could offer enhanced network virtualization. Intel is already going after high-performance computing and cloud computing with its Arc GPUs. Moreover, the company is also interested in radar and electronic warfare for aerospace and defense, as well as 5G cellular network tests and arbitrary waveform generators. With their “high-speed networking, computing, and storage acceleration,” the new Intel Agilex M-Series FPGAs could help significantly, added Gomez.