Intel today announced new 12th gen mobile processors under the HX name. The new family is a mobile equivalent of 12th gen desktop counterparts, and it comes in i5, i7, and i9 variants with up to 16 cores and 55W base power. Intel says these processors "utilize desktop-caliber silicon in a mobile package" to deliver a "high level of performance for professional workflows."

Intel's 12th gen HX processors use the new hybrid core technology the company introduced earlier. Users will get to choose a model with up to 16 cores (8 performance and 8 efficiency) and 24 threads. According to the spec sheet, processors support up to 128 GB of DDR4-3200, LPDDR4-4267, DDR5-4800, and LPDDR5-5200 of ECC RAM. Another notable aspect of the HX lineup is that Intel allows overclocking memory and cores for even more performance.

Intel says the new processors operate up to 17% faster than previous-gen HK CPUs in single-thread tasks and up to 64% in multi-thread scenarios. App-specific uplifts according to the company include +12% in Autodesk AutoCAD, +28% in Revit, and +21% in Inventor. 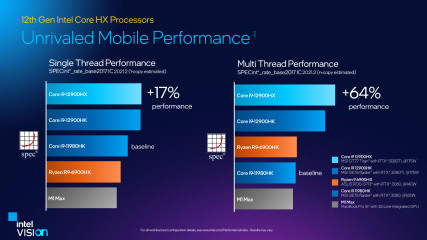 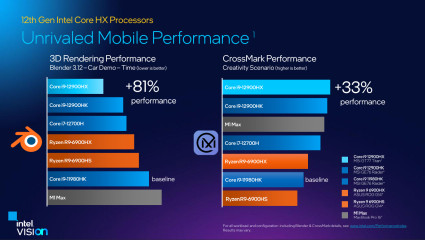 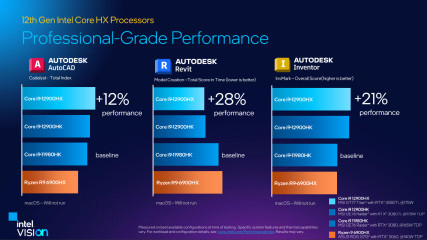 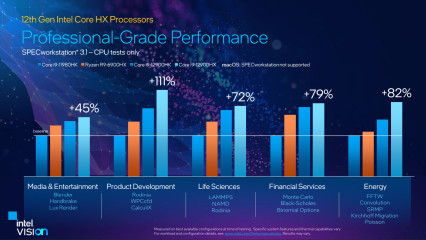 Major PC OEMs will launch their Intel HX-based workstations this year. Expect models from Dell, HP, Lenovo, and others. Intel has also made a driver available to support these new CPUs in the form of a new Intel Graphics 30.0.101.1960 driver update released earlier today, which also fixes a number of game-related issues on supported chipsets.