According to Reuters Canada, last month's implementation of the European Union browser ballot isn't exactly helping Internet Explorer's overseas market share. Then again, that was the entire purpose of it--to give people other options. The browser ballot was added to Microsoft's European version of Windows 7 as per an antitrust case with the EU.

Statcounter statistics show that, in France, IE's market share has dropped 2.5% since last month. In Britain, it has dropped 1%, and in Italy, 1.3%. While this may not seem like much in comparison to the sixty-something percent piece of the pie that IE holds in the European market, these trends could foreshadow what's to come. If Microsoft continues to lose a percent or two a month, it won't be long before their dominance becomes a thing of the past. The study also notes that Opera and Firefox are seeing significantly more downloads in Europe than they've been accustomed to. Mozilla expects this trend to continue.

In July 2009, Microsoft proposed a ballot screen to allow users to pick their default browser in Windows XP, Vista and 7. The European Commission accepted Microsoft's plans in December 2009 after the software giant agreed to randomize the ballot screen due to several complaints from rival software companies. The agreement marked the end of the "browser wars" after Opera originally filed a complaint with the EU in 2007. The European Union originally accused Microsoft of anti-trust violations back in January 2009. 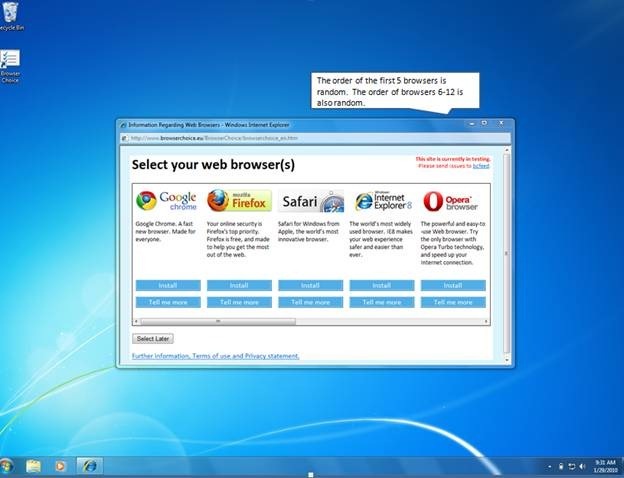