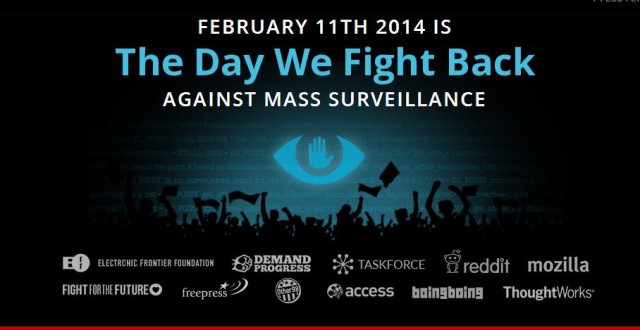 All the recent revelations about the NSA and its spying programs have created a lot of anger and mistrust around the world, and most of all online. As such, the Internet has appointed a day in which a special kind of mass protest will take place.

A group of companies, organizations and general users of the internet have banded together and declared February 11th as the day of protest against all the electronic mass surveillance that has recently come to light.

February 11th is a month after the anniversary of Aaron Swartz’s passing and the protest is also in his honor. Besides regular Internet users, the protest will be joined by Mozilla, Reddit, Boing Boing, EFF, and a slew of other NGOs and privacy organizations.

The protest itself will take a similar form to the anti-SOPA/PIPA protests that managed to bring down those legislative proposals. Interested folks can join in at Thedaywefightback.org. Banners and widgets will be strewn across the web in an effort to spread the word and show everyone that the Internet will not take this lying down.

However, we will be a little bit skeptical here. While the idea is good, and there’s no doubt whatsoever about the inherent “badness” of mass surveillance, there’s a major difference between this protest and the ones that destroyed SOPA. Those protest had a very precise way to solve the problem: call your representative and tell him you will not stand for such a law. But this time, while public pressure may do good, it won’t immediately address the problem to the legal complexities inherent in such a debate.

However, we do hope the protest itself will be a success and will drive this debate forward.