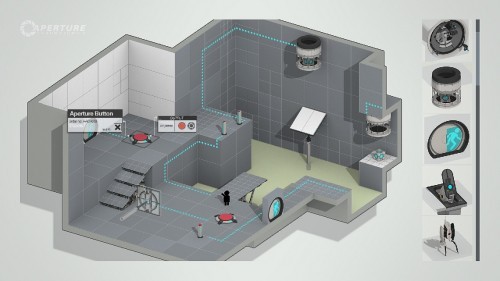 As they do with many of their games, Valve continues to release new content for Portal 2 over a year after the game was launched in April 2011. Today, the latest free DLC pack for the first person puzzle shooter will be released for the PC and Mac versions via Steam. It's called the Perpetual Testing Initiative and it offers Portal 2 fans a way to quickly and easily create their own "test chambers" in the Aperture Science Enrichment Center via a drag-and-drop interface. These new puzzles can then share them with others via the Steam Workshop.

We got a chance to ask Valve some questions about the Perpetual Testing Initiative and received some answers from team member David Sawyer.

(Editor's Note: We also asked Valve if the puzzle editor would be made available to owners of the PS3 and Xbox 360 versions of Portal 2. These questions went unanswered.)

First, Portal 2 came out over a year ago. Can you give us a sales update on Portal 2?

How did the idea for coming up with an easy-to-use puzzle editor for the game come about?

Somewhere in the middle of developing Portal 2, the team began to talk about the possibility of a simple editor that would let people make their own puzzles. The design of the game - and even Portal's fiction - supported this idea too well for us to ignore it. Then, as the visual style of the marketing videos emerged, it seemed like a natural fit to combine their clean, simplified isometric art direction with the editor we had in mind. After Portal 2 shipped, we started to experiment with how the editor would work, and that initial idea carried through to what ultimately became the Puzzle Maker.

What were the main goals in terms of making the puzzle editor?

Shortly after Portal 2 shipped, we released an authoring tool package that let users create maps with the same tools that we used to build the actual game. These tools are powerful, but they're complex and therefore difficult for beginning designers. As a result, we had a lot of people interested in making puzzles, but only a few that pushed through the technical hurdles to actually produce real test chambers. That said, the hardcore community still managed to create over four hundred of them. Unfortunately, because there was no standardized way to host and distribute this user-generated content in-game, very few players knew about any of this new stuff, and even fewer managed to jump through the hoops required to play it. So we had two main goals: reduce the complexity of our puzzle-design toolset and remove the difficulty people had finding and sorting through user-made content.

The Puzzle Maker lets people try their hand at creating puzzles while also letting them discover, share, and easily play what they and other Portal 2 players are coming up with. So the editor needed to let anyone pick it up and not just use it, but enjoy the process of using it. We think people will have fun with the Puzzle Maker even if they never share their work with anyone else. On the other hand, there are some incredibly talented designers who now have the tools and, more importantly, the stage to show off their work to the whole Portal 2 player base.

What were some of the challenges that were encountered in making the puzzle editor easy to use?

We approached the development of the Puzzle Maker in the exact same way as Portal 2: We put together prototypes to test our ideas and had many, many people actually use the tool while we observed. We had originally scheduled time to build a system to help teach new designers how to use the editor, but the more testing we did, the more we realized that expending extra effort in the right places would let us skip the straight tutorial step and have people simply experiment with the Puzzle Maker and learn for themselves. We also put a lot of effort into making the tool entertaining to use. We want players to experience the thrill of running around in a 3D space they've created, even if they never produce anything they particularly feel like sharing with someone else.

How does the editor integrate with the Hammer level editor to create more detailed editors?

There are some really incredibly puzzle designers who have been using our more technically complicated tools for a few months now, and we wanted to ensure that the Puzzle Maker enhanced their toolset rather than diminish it in any way. The Puzzle Maker allows users to export their work into the native format of Hammer (our in-house map creation tool) and build more complex puzzles on top of that initial work. If players enjoy the puzzles they create and want to take their skills to the next level, we feel that'll be a very effective bridge for them to move into the more technical tools. That said, the Puzzle Maker is incredibly powerful for all of its simplicity and can easily reproduce pretty much every puzzle from Portal 2.

Will there be support to add custom art and content in the puzzle editor at some point?

When we released Portal 2 we immediately began work on more co-op content to deliver to our players as DLC. When we release new content in that pattern it's a very one-way conversation: we're giving our players something cool, then we go about working on the next bit. But with the PeTI update, we wanted to change that to be more of a conversation between us and the players. The update allows our players to tell us what's important to them, what they'd like to see next, and where they'd like to see Portal go. As the community grows, it'll be obvious what work will be the most valuable, and we'll be able to react to that. We're not sure what form it'll take just yet, but we're excited to see how it evolves.

Our thanks to Valve for answering our questions