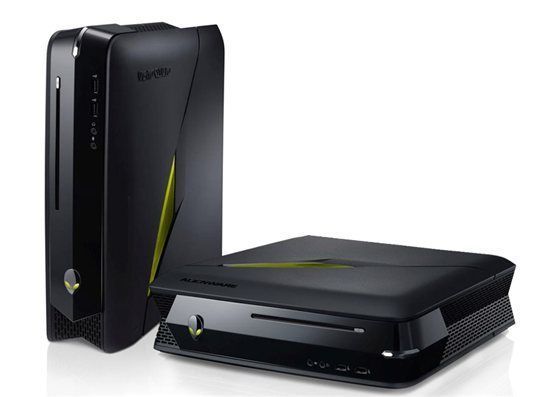 So far we have chatted with the heads of Falcon Northwest, MAINGEAR, Velocity Micro and Origin PC in our interview series with the creators behind high end and gaming PCs. Today we offer our chat with Frank Azor, the general manager of Dell's Alienware division, which makes their gaming PCs such as the X51, the Aurora and their lineup of gaming laptops. Founded in 1996, Alienware was acquired by Dell in 2006 and is perhaps the most well known brand of gaming PCs.

First, Alienware recently announced the X51 PC, which has a case that made it look more like a game console. How did the concept for the X51 come about?

Several factors came together that inspired the design of the X51 including TVs making the move to 1920 x 1080 resolutions and considerably improving their response time and overall image quality, the improved cost and quality benefits we have seen from the Dell integration and the desire to have an open platform like Windows on the TV whereby we can run any applications and access any websites we desire.  The X51 is just the latest in Alienware’s growing portfolio of innovative products addressing the needs gamers.

So far, what's the response been like from Alienware's customers on the X51?

As we began designing this product everyone that got involved with the project asked when they could buy one themselves so we knew early on that we were building something special.  Overall the end-product resulted in being much better than we originally imagined; X51’s performance, price, upgradeability, and quality has surpassed all our original goals.  We had a couple hiccups with the first few units that shipped but we responded quickly and have since been enjoying all the stories we’ve been reading from customers on how they are using their X51s around their homes.  I am very happy with the hard work the team put into making this project a success and in true Alienware culture we celebrated for about 30 seconds and immediately began working on making it even better.  Just recently we launched new configs including Intel’s latest processors, larger hard drives, and larger memory capacities.  Our work is never done :).

Alienware decided to stick with the Aurora desktop design for its high end PC. Why did the company decide to retire the Area-51 case design?

Actually our customers made the decision for us, the Aurora was favored by the vast majority.

Some people have said they can make their own PCs cheaper and have them be as powerful as those made by companies such as Alienware. What is your argument to convince those people to purchase one of your desktops or notebooks?

Most of us at Alienware used to build our own systems so we know the pride that goes into such a project.  It’s unlikely that we are going to convince anyone that has the time, knowledge, and tolerance on buying versus building so we don’t bother making that argument. However, if you no longer have the time to research and choose all your own components or tolerance to troubleshoot and service the system yourself then Alienware is your best choice for a turn-key high—performance rig backed with a great warranty and 24/7 toll-free tech support with onsite.  If you strictly compare hardware then yes those arguments, in some cases, are correct however an Alienware system is more than simply just an amazing piece of hardware.  Here are a few things that differentiate our products from what you get when you DIY.

The Alienware M14x and the M18x are the most powerful 14-inch and 18-inch laptops in the world. All three laptops feature the latest technology on the market today. From the new Intel Ivy Bridge quad core processors, the latest in high performance graphics from NVIDIA and AMD, USB 3.0 for fast data transfer, optional 3D HD gaming capability, optional Blu-ray disc drive and exceptional surround-sound quality from Creative Labs and Klipsch speakers. All Alienware laptops and desktops come with Alienware Command Center, which provides intuitive, user‐friendly access to exclusive applications and controls including AlienFX lighting which allows users to personalize their chassis by adjusting their system’s lighting colors.  You can see AlienFX in action in a number of today’s current games, including EA’s Battlefield 3 and currently 28 other games. In addition, the Alienware laptops feature AlienAdrenaline, which enables users to create shortcuts associated with games, or applications capable of triggering a chain of commands meant to improve system performance or to customize the experience. Alienware Gaming Services enable gamers’ lifestyles by providing services, which support the latest games on the market and come with a “No Fix, No Fee” policy. Services offered include New Game Setup, Game Performance Optimization, Game Customization and Personalization, and In Game Troubleshooting. And of course there’s much more but I’ll cut it short in consideration of our time :)

Overall though theres a sense of pride and accomplishment that comes with owning an Alienware and joining the family thats similar to booting up your own DIY rig for the first time.  We aren’t the right solution for everyone but if you do decide to buy versus build we are certainly the best solution for you.

Let's talk about the future of hardware in desktop and notebook PCs. Where do you see hardware such as graphics cards, hard drives, displays and memory going in the next couple of years?

Ultrabooks and Tablets are challenging the norm when it comes to form factors and power consumption which is resulting in overall higher performing components in more efficient designs.  Technology providers are having to innovate with tighter constraints than ever before making for an interesting time filled with incredibly performing components at low costs and with small form factor requirements.  Higher resolutions are coming on quickly which is great for everyone.  I think we are long overdue for resolutions such as 4Kx2K and I’m excited to be seeing some coming soon.  Regarding hard drives the emergence of hybrid technologies like Intel’s Smart Response Technology might challenge consumer demand for large capacity SSDs until their costs come down further.

We see a lot of reports about the "death of the PC" due to the smartphone and tablet industry. Why do you think the hardcore PC hardware market is still going to be around even with the rise of both of these products?

Absolutely!  The PC gaming market is thriving.  According to Jon Peddie Research, the PC gaming hardware market is on pace to hit $23.6 billion in 2012. JPR estimates that there are 54 million performance and enthusiast class PC gamers spread out around the globe. New entrants and console converts are expected to drive that figure to 72 million by 2015 as the PC gaming hardware market approaches $32 million. Tablets and Smartphones have constraints to them by the nature of what makes them attractive, their mobility and battery life benefits over desktops and notebooks. Those constraints come at a cost though and in the case of gaming those costs will come in the forms of limited immersion and control.  These are just two of some of the basic attributes of PC Gaming that have kept it growing for over 3 decades and that will continue to fuel its growth for the foreseeable future.

As a gamer I struggle in foreseeing a day when I would replace the incredibly immersive graphics and high fidelity of control with a keyboard and mouse on my favorite FPS or RTS for the limited screen size and control-set a tablet or smartphone has to offer.  I own a tablet and smartphone and I play games on both of those devices but I have no plans of replacing my PC Gaming with either of those devices.  I see them as complimentary to my PC Gaming experience.

We have also seen the beginnings of the cloud-based PC game service. Do you think that if this becomes popular it could mean that there will be less of a need for high end PCs for playing games?

Cloud gaming is very exciting and I think it’s a great platform to experience some games but not all.  The internet is a very volatile environment where performance isn’t reliable and that makes it challenging to promise a superior or even equal-to experience to your customers if you are a cloud gaming provider.  We tend to be demanding of our gaming experiences (hence why we invest so much money into our systems) and any compromise to that experience usually isn’t acceptable to us when it comes to doing what we love.  Until the cloud can replicate the low latency and reliability you get in an in-home fully featured PC, which I don’t expect anytime soon, I don’t see our core customer making the move exclusively to the cloud, I see it as a better fit for tablets, smartphones and consoles.  It also makes for a great game demo and quick play solution which I think it will thrive in for the PC Gamer.

Windows 8 is, without a doubt, the biggest change for Microsoft's operating system since it began. What is your personal opinion on Windows 8 and how it will affect the PC industry?

I think Windows 8 is a good upgrade for most PCs.  I expect people may have some frustration with the learning curve of an entirely new looking operating system but if they give it a chance they may like it better than their previous versions.  For platforms like X51 that lend themselves to being connected to TVs I think Windows 8 will be great, the OS will look familiar to Xbox users and it looks great and is easy to navigate on a large screen television.  I expect we will see a large variety of tablets in all shapes, sizes, and price points that try and blur the lines between tablets and notebooks similar to what Microsoft’s own Surface PC does.

Does Alienware have any plans to release any gaming PC products that will use Windows 8's touch screen interface, such as a notebook or tablet-slate device?

I’m sorry but we don’t comment on unannounced products or speculation.

How do you feel about Microsoft entering the PC hardware market with the Surface?

Microsoft is an important partner to Alienware and Dell and Dell will be delivering a full portfolio of Windows 8 tablets – and other products -- later this Fall.  I think the Surface sets a bar for all of the tablet manufacturers out there to beat and I have no concern in Dell’s ability to do so.

Finally, is there anything else you wish to say about Alienware and its plans for the future?

Thank you to our customers and fans, we work hard to bring you great products and we thank you for the opportunity to do so.  Like us on Facebook or sign up for our newsletter on www.alienware.com to stay in touch.  Also check out www.alienwarearena.com.