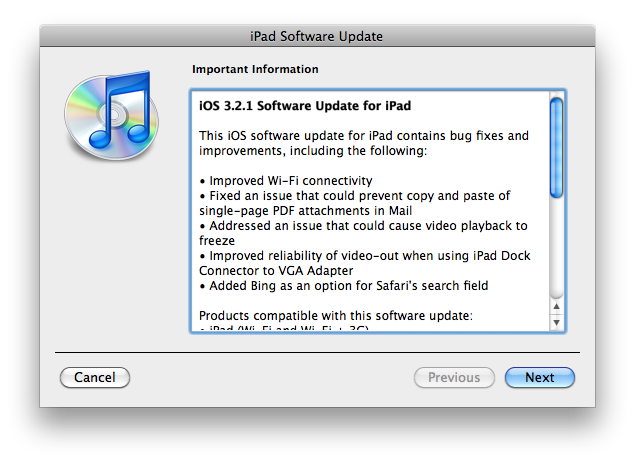 iOS 4.0.1 for iPhone and iOS 3.2.1 for iPad are rolling out to devices right now. iTunes has been prompting users to update to the latest iteration of their mobile operating system. Although not a fully fledged 4.1 release that is expected later this quarter, this incremental release should solve some of the ongoing issues plaguing users of iOS 4.0. This "incremental" update is reportedly clocking in at 579MB, which is very large for a minor release.

Users are reporting that the signal strength indicator fix found in iOS 4.1 beta are suggesting that the fix doesn't actually affect signal strength, only the visual "bar" indicators on the screen. Tomorrow's press conference should hopefully address iPhone signal issues.

Engadget has provided a screenshot of the new signal bars, the new longer bars are quite clear.

Apple's iPad update has also been released, addressing a number of issues including the ever-present Wi-Fi connectivity problems:
- Improved Wi-Fi connectivity
- Fixed an issue that could prevent copy and paste of single-page PDF attachments in Mail
- Addressed an issue that could cause video playback to freeze
- Improved reliability of video-out when using iPad Dock Connector to VGA Adapter
- Added Bing as an option for Safari's search field
If you would prefer to grab the update direct from Apple rather than through iTunes, here are the links:
iPhone 4
iPhone 3GS
iPhone 3G
3.2.1 for iPad