9to5Mac cites a person familiar with the software, outlining the company's efforts to increase the presence of third-party social networks in its overhaul of iOS 7.

Given the recent revamp of Flickr, there has never been a better time to move new users towards the service. Existing Flickr users who aren't iOS users could be encouraged to adopt the platform if Apple is able to demonstrate seamless integration, and those who are already users will be prompted to at least update their software. At present, both Apple's iPhoto apps for iOS and OS X offer some degree of Flickr integration, but there is no native support for the service in the mobile OS. 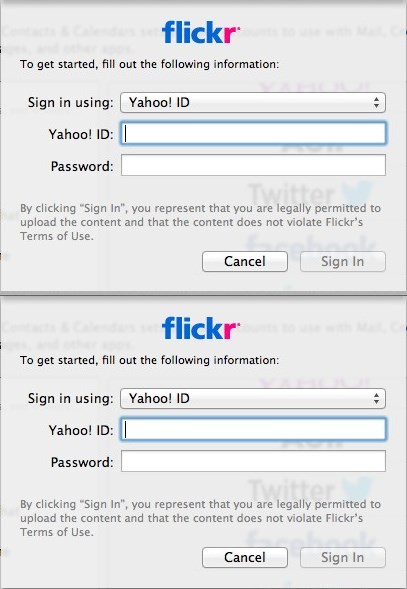 As in the above screen captures, both Vimeo and Flickr are directly integrated into OS X Mountain Lion, allowing users to share images and video to the services with just a few clicks.

Yahoo currently provides data for the stock Weather and Stocks iOS apps, as well as voice-command responses through Apple's Siri interface. iOS 7 is set to be a major overhaul, offering a 'flat' design akin to Windows Phone, with more features to put it in line with mobile OSes that some claim it has fallen behind.