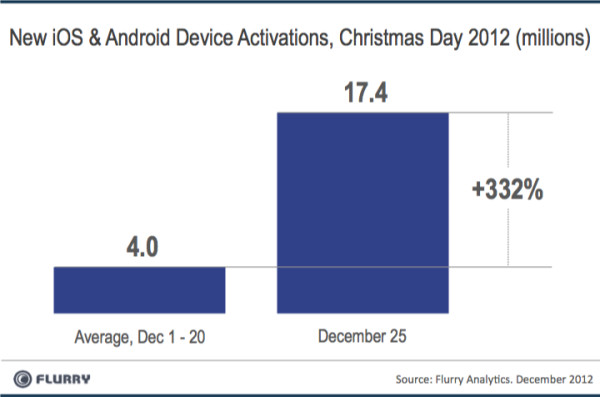 Christmas Day is a huge day for smartphone and tablet companies. That's when more new devices are activated by users than any other day of the year, as people receive them as Christmas gifts. Today, the online ad network Flurry claimed that Christmas Day 2012 set a new record for iOS and Android activations.

In a post on its blog, Flurry stated that there were 17.4 million combined activations of Android and iOS devices on Christmas Day. That compares to a normal baseline of about 4 million activations per day in the 20 days before Christmas. It's also much higher than Christmas Day 2011, when Flurry said there were 6.8 million new product activations. Flurry bases its data on the over 260,000 apps that use its Flurry Analytics system, along with "publicly announced figures from Google and Apple."

Over the next week, up through New Year’s Day, app download rates will remain significantly elevated.  Flurry anticipates downloads to surpass more than 1.5 billion, and have a shot at breaking through the 2-billion download barrier for the first time ever.

While more smartphones than tablets were activated in the days before Christmas Day, with a ratio of 80 percent versus 20 percent, Flurry says that on the day itself, tablets had a slight majority of new activations; 51 percent versus 49 percent for smartphones.