Wouldn't it be cool for geeks to pull out their iOS device - their iPhone, iPad, or iPod touch - and access their collection of media and files from torrents, without jailbreaking their device or hoping for Apple to approve a torrent client (hint: it won't ever happen)? Fortunately, there will be a solution at hand for people to watch reruns of Big Buck Bunny or load up on "Linux distributions" on their portable device, all collected from their favourite torrent sources. The killer aspect of this solution its its ability to stream torrents on the fly, something that has not been seen before. 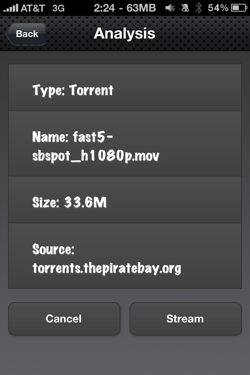 The solution is called NowStream and is developed by Sohail Prasad, a Carnegie Mellon student and soon-to-be intern at Google. The web app was built at TechCrunch Hackathon in New York and was demoed at TechCrunch Disrupt. A demonstration is available below:

The ease of streaming one's favourite videos and not worrying about unsupported codecs and file types, or video dimensions should please the masses. In addition, making the app available via Safari makes it out of reach for Apple's App Store rules. The service will be available soon as Prasad figures out a way to market his product without attracting the wrath of the industry associations.