Apple has just released the iPhone firmware 3.1.3 available for both the iPhone and iPod touch to resolve a few issues.  The issues the firmware addresses are for the iPhone 3GS battery accuracy, third-party application crashes and crashing while using the Japanese Kana keyboard.

This update for iPhone and iPod touch contains bug fixes and improvements, including the following:

Products compatible with this software update:
• iPhone (all models)
• iPod touch (all models)

The iPhone firmware 3.1.3 comes in just under 300mb.  Jailbroken iPhones and iPod touch owners should be warned not to update their device, as you may lose your ability to jailbreak or unlock in the future. 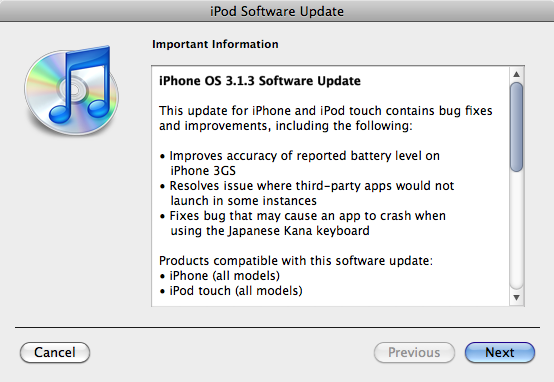 Thanks to what for the image.