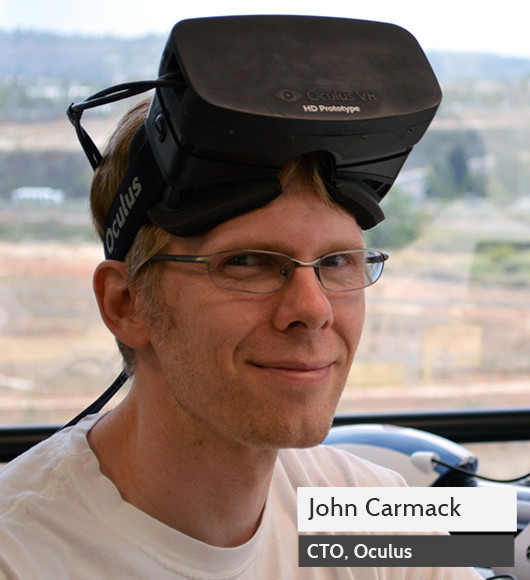 John Carmack, one of the most influential figures in gaming and graphics programming, has made a surprise career decision and has joined a company that is making a VR helmet for gaming.

In a press release, Oculus VR has revealed Carmack is now the new chief technology officer of the company. Oculus VR is currently in the middle of developing the Oculus Rift, a virtual reality headgear product that's being made for the PC gaming market. It started life as a Kickstarter project and Carmack even said at his QuakeCon keynote speech in 2012 that the device was a new obsession for him at the time.

In a statement, Carmack said:

Now is a special time. I believe that VR will have a huge impact in the coming years, but everyone working today is a pioneer. The paradigms that everyone will take for granted in the future are being figured out today; probably by people reading this message. It’s certainly not there yet. There is a lot more work to do, and there are problems we don’t even know about that will need to be solved, but I am eager to work on them. It’s going to be awesome!

Carmack will work out of a new Dallas, Texas Oculus VR office and the team is also hiring a few more people to work at that location. While development kits for the Oculus Rift have been sent to some developers, there's no word yet on when the consumer version of the product will be released.

While a press release sent out to the media labeled Carmack as "formerly from id Software" and said he is now working full time at Oculus VR, id's official Twitter account says Carmack is still with the company:

Happy to say @id_aa_carmack is not leaving id & will continue to provide leadership for our games in development.

Carmack made no indication he was joining a new company when he appeared at QuakeCon 2013 to give two keynote speeches. Oculus VR is not making Carmack available for interviews.

Update: Carmack has posted up a note on his own Twitter feed that makes it clear Oculus VR is now his number one priority in terms of work:

My time division is now Oculus over Id over Armadillo. Busy busy busy!

Armadillo refers to Armadillo Aerospace, Carmack's private space flight venture that he has funded and worked on for a number of years. Carmack recently confirmed to Ars Technica that company is slowly winding down and has let go of most of its full time employees.