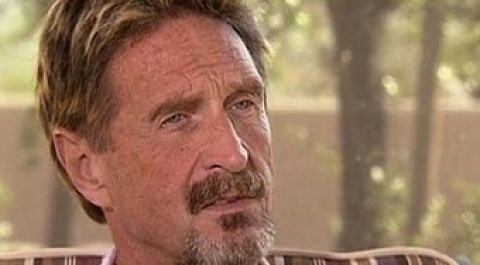 It's been an interesting last few days for John McAfee. The founder of the McAfee antivirus company (later acquired by Intel) has been on the run from law enforcement officials in Belize. The police insist that they merely want to question McAfee in their investigation of the murder of American businessman Gregory Faull, which happened on November 11th. McAfee has stated that the Belize police are actually trying to arrest him in their case, while also professing his innocence.

On Sunday, online reports started to come in that McAfee was arrested at the Belize-Mexico border, but McAfee later posted on his personal blog that the person who was detained was in fact a decoy. The whole thing was just a ruse to get McAfee out of Belize and today, he updated his blog to reveal that he has in fact made his way to Guatemala. He added that he will be " ... meeting with Guatemalan officials this morning.  If all goes well I will do a press conference tomorrow."

In a later blog post, McAfee repeated his stance that he had nothing to do with the murder of Faull. He also said he would answer questions from Belize police officials over the phone. He also made an offer to the current prime ministry of Belize, Dean Barrow :

I will agree to meet you in a neutral country to discuss our mutual issues.  It is entirely possible that you have little or no knowledge of the level of corruption being propagated throughout every branch of your government.  I will turn over to you thousands of hours of video and audio as proof, providing that we meet as gentlemen and are mutually convinced of our honesty.

This story doesn't sound like it is over by a long shot and it's likely we will get even more updates on Wednesday.