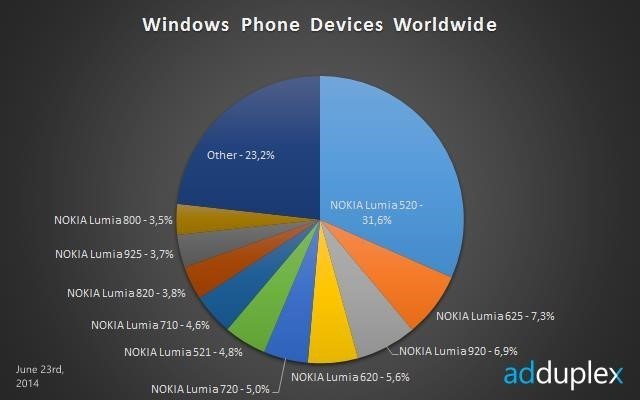 The latest report covering Microsoft’s mobile OS shows some interesting stats as to what’s happening with the Windows Phone platform. Our readers know that we take regular looks at the data coming from AdDuplex, a cross-promotion company, to see how the Windows Phone ecosystem is doing.

The report for June shows once again that Windows Phone 8.1 Developer Preview adoption is high, while also showing hints of growing competition among the platform’s OEMs.

First up we take a global look at how the Windows Phone market is structured. There hasn't been any significant changes on this chart for the past couple of months with Nokia devices, especially the low-end Lumia 520 leading the way.

We are however seeing a slowdown when it comes to sales of these mid and low-end Windows Phone 8 handsets, including the 520 and its variants as well as the other affordable 600 and 700 series. Their marketshare seems to have stagnated and even declined in certain markets in anticipation of new Windows Phone 8.1 devices. 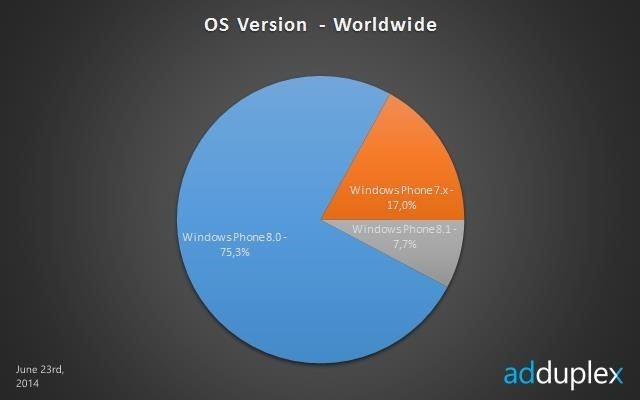 In terms of OS version distribution we’re seeing a slow and steady decline of Windows Phone 7, a decline that’s been happening for the last two years now. Windows Phone 8.0 takes up more than three quarters of the market while the newest OS, Windows Phone 8.1, is already running on 7.7% of devices.

This shows a 2.5% percent growth compared to last month and it’s very significant considering WP 8.1 is just now starting to hit a limited number of devices in certain markets. As the roll-out goes on throughout the summer, this number is bound increase rapidly. 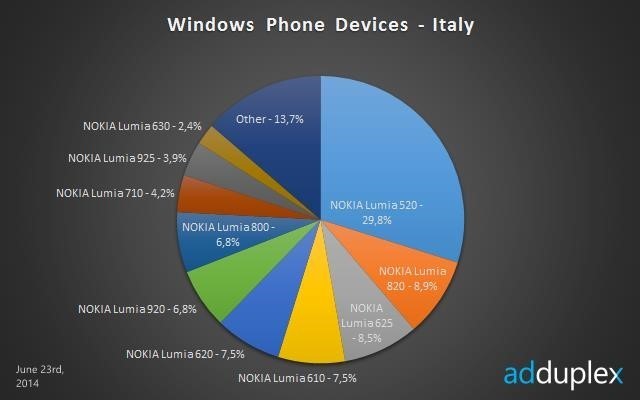 Taking a look at new devices and OEMs we’re seeing some encouraging, albeit small, changes in distribution. The brand new Lumia 630 that comes with Windows Phone 8.1 has started to show up on the charts and it’s even broken in the top 10 list in Italy, one of Microsoft’s most successful markets. 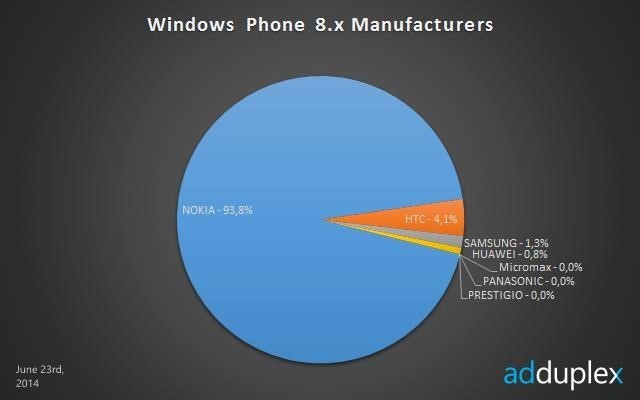 New OEMs are also starting to show up including Prestigio, Micromax, Allview, all of which have been recently announced as new Windows Phone partners.

Finally a new unreleased Nokia handset is showing up in the data. The model name is RM-983/4/5 which seems to a mid-range Windows Phone alongside its carrier variants. All we know so far is that this device has a 5-inch screen with 720p resolution and that it comes with the newest version of Windows Phone 8.1.

For a bit more detail on the device marketshare and Windows Phone distribution be sure to check out the AdDuplex blog where the full report will be posted on Monday.