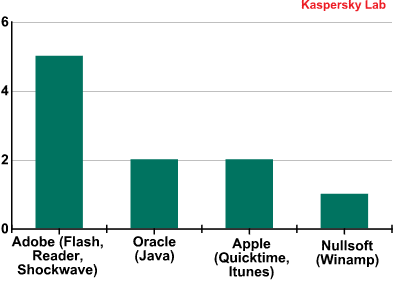 If you use a software product from Microsoft, or indeed any software on your Windows PC, there's always the concern that some issue might surface which could be found and exploited by hackers. Now, a new report from computer security specialists Kaspersky Lab highlights how Microsoft has improved its software products.

The latest quarterly report of the company's IT Threat Evolution list includes the list of the top 10 most vulnerable PC programs. At the end of the report, it states:

Microsoft products no longer feature among the Top 10 products with vulnerabilities. This is because the automatic updates mechanism has now been well developed in recent versions of Windows OS.

The list itself includes Adobe products such as Flash, Adobe Reader and Shockwave in five of the top 10 listed vulnerable programs. Oracle's Java, Apple's QuickTime and iTunes and Nullsoft's Winamp are also on the list.

Microsoft has been using automatic updates for its software for some time. It usually makes one big monthly update, known in the industry as "Patch Tuesday", but the company has pushed out emergency updates quickly if they are alerted to a particular problem.