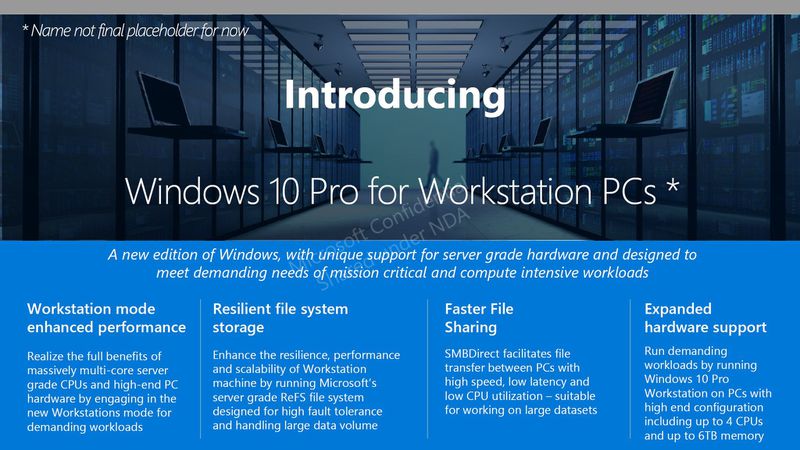 Earlier today, we reported that Microsoft may be working on three new SKUs for Windows 10, as revealed by some inquisitive users looking into the pkeyconfig files for Build 16212, which Microsoft erroneously released to Windows 10 PCs and phones earlier this week.

Now, a leaked slide from Microsoft has provided further details on at least one of these new SKUs. Dubbed Windows 10 Pro for Workstations (a branding Microsoft hasn't used in more than 20 years), this new SKU is supposed to be what the previous report described as Windows 10 Pro for Advanced PCs. Though, as the slide suggests, Microsoft has still not decided on a final branding for this edition of Windows and it could be subject to change at a future date.

The new version of Windows 10 is optimised for high-end, server-grade hardware, with an emphasis on 'mission critical and computer intensive workloads'. In order to achieve this, Windows 10 Pro for Workstations is slated to have an all-new replacement for the NTFS file system, alongside a bevy of other features aimed at machines that process large amounts of data on a regular basis:

Keeping the above features in mind, it's clear that the SKU will be aimed at Enterprise customers, and not consumers. There is also likely to be a N variant modified for commercial use in the European Union.