When people ask me what kind of ultrabook or convertible they should buy, my top answer is almost always something from the Lenovo ThinkPad X1 lineup. If you want a convertible, get the X1 Yoga, and if you want a thin and light clamshell, get the X1 Carbon.

These are wonderful machines, with some of the best keyboards around, solid and consistent performance, and lovely Dolby Vision displays. This year's ThinkPad X1 Carbon makes some changes though, including for the Dolby Vision screen. Previously included with the 1440p option, Dolby Vision is offered on the 4K model, and this is also the first time there's been a 4K display on a 14-inch X1 laptop.

There are also some design changes, with Lenovo offering the standard black model and a new carbon fiber weave variant. Luckily, Lenovo sent me both. Not only that, but one of them includes the 4K Dolby Vision display and the other includes the 1080p regular one. More on that in a bit.

The pricing listed above is the "full" price and the current sale price. I've never seen Lenovo ThinkPads listed at full price, as there are always sales going on, but the prices do fluctuate.

There are a couple of things to note. There are four display options; the two not listed above are a 300-nit FHD touch panel and a 300-nit QHD non-touch panel. The QHD option is no longer offered with Dolby Vision.

The big change with this year's ThinkPad X1 Carbon is that it's thinner, lighter, and smaller. Yes, it comes in a smaller footprint now, and it weighs in at just 2.4 pounds. If you're looking for thin and light without compromising on power, this is it.

In fact, the weight is what you're going for here. Traditionally, the X1 Carbon and the X1 Yoga are two very similar machines, but the X1 Yoga offers the additional functionality that's offered with a convertible. The benefit to the clamshell X1 Carbon is its weight. And I have to say, at 2.4 pounds, it feels great. It's easy to pick up with one hand, and it's comfortable to carry in a bag. 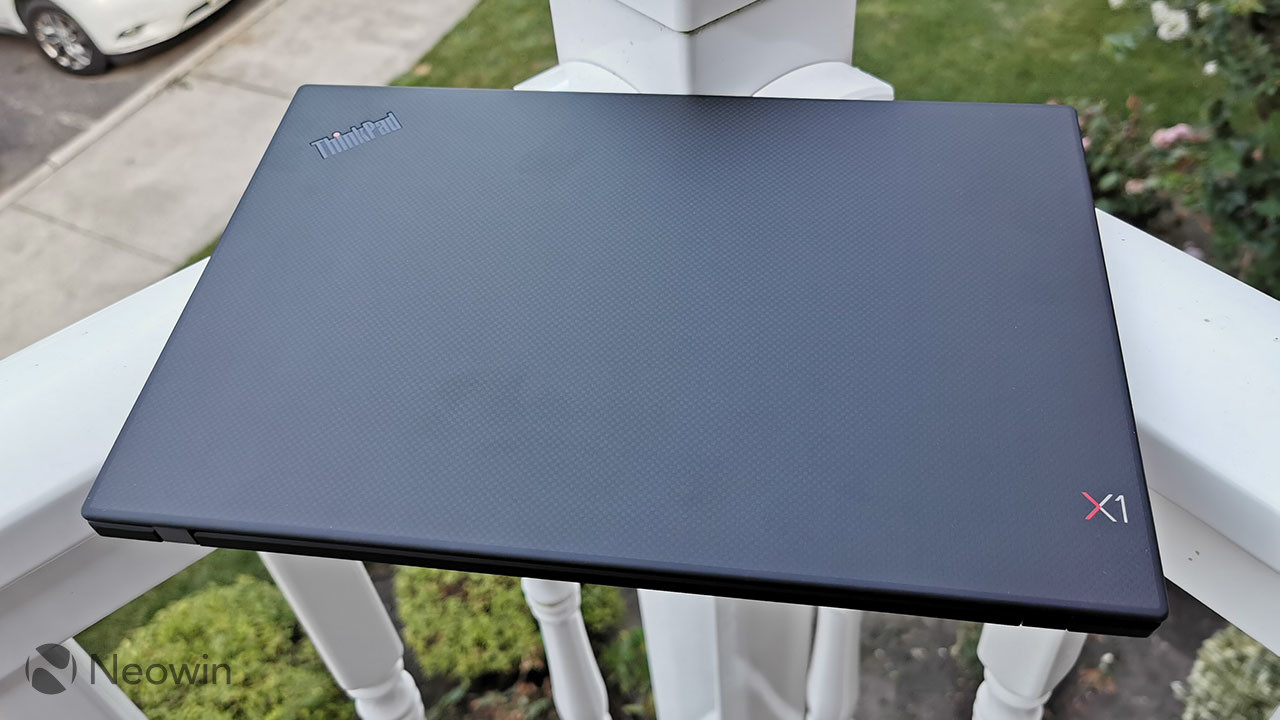 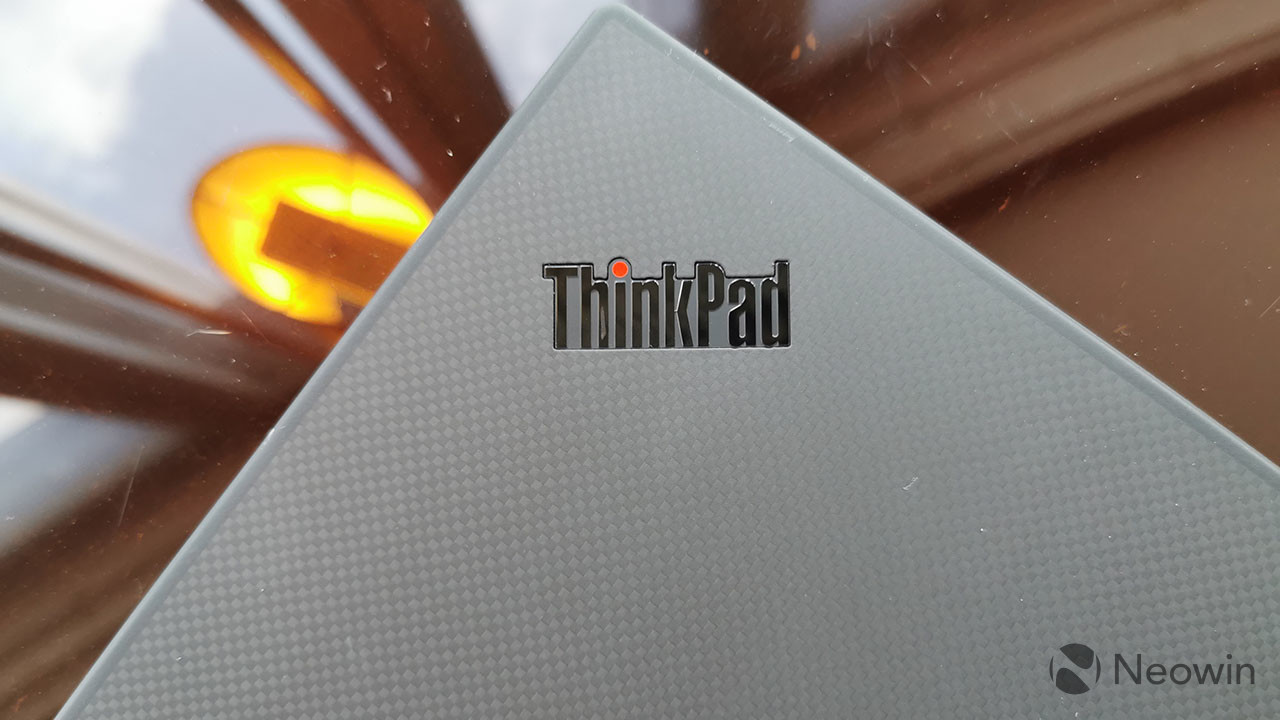 As the name implies, most of the device is made out of carbon fiber, while the bottom is a magnesium alloy, both of which are light materials (we'll talk about heavier materials in a couple of weeks when I review the now-all-aluminum ThinkPad X1 Yoga). I really like the feel of carbon fiber. It's smooth and cool to the touch, but it's also strong and light. 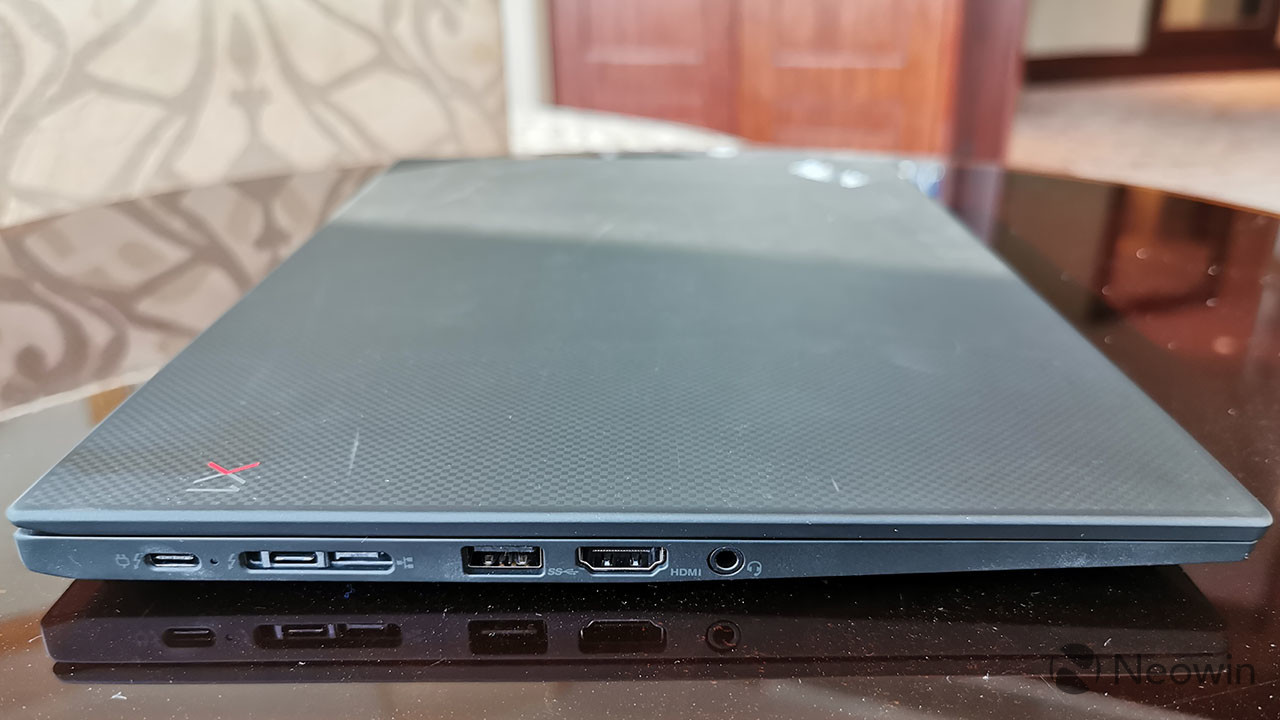 As far as ports go, there are plenty to choose from. After all, this is a business laptop so Lenovo can't take away the USB Type-A ports just yet. On the left side, there are two Thunderbolt 3 ports - one of which supports mechanical docking - one USB 3.1 Gen 1 Type-A port, HDMI 1.4b, Ethernet extension, and a 3.5mm combo audio jack. 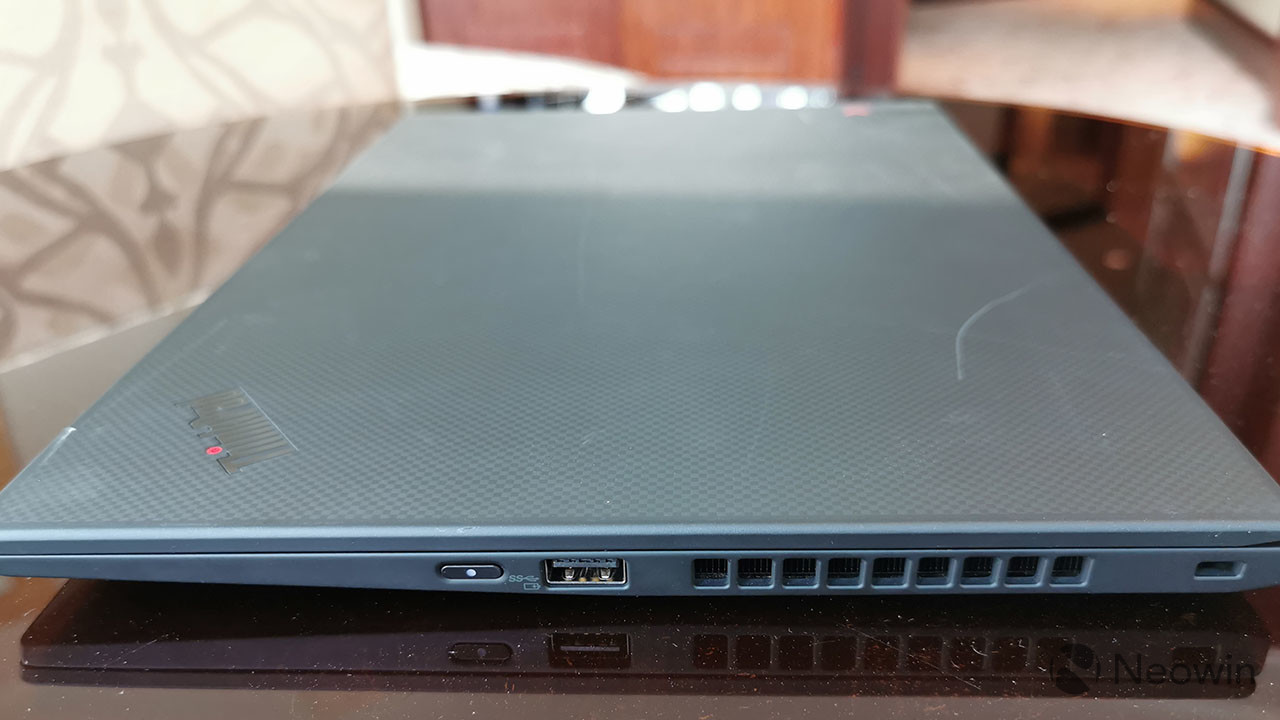 On the right side, you'll find another USB 3.1 Gen 1 Type-A port, and also the power button. This is the first time that the power button has been placed on the side of a ThinkPad clamshell; usually, this placement is reserved for convertibles while clamshells have it on the keyboard.

On the bottom of the device, you'll find two Dolby Atmos speakers (as well as two above the keyboard). That bottom panel can be removed with five Philips-head screws. That will give you access to the internals, and Lenovo provides documentation on swapping out things like the SSD, battery, and more.

As is the case with all ThinkPads, the X1 Carbon is tested against 12 MIL-STD-810G tests, so it can handle extreme temperatures, shocks, vibration, dust, and more.

As I mentioned above, there are four display options: FHD, FHD with touch, QHD, and UHD with Dolby Vision. I was sent the FHD and UHD models. Obviously, the UHD panel is prettier with its vibrant Dolby Vision colors. The FHD one is a matte anti-glare screen, and while it does look nice with accurate color representation, it's not as vibrant as the Dolby Vision one, or as clear as a 4K screen. 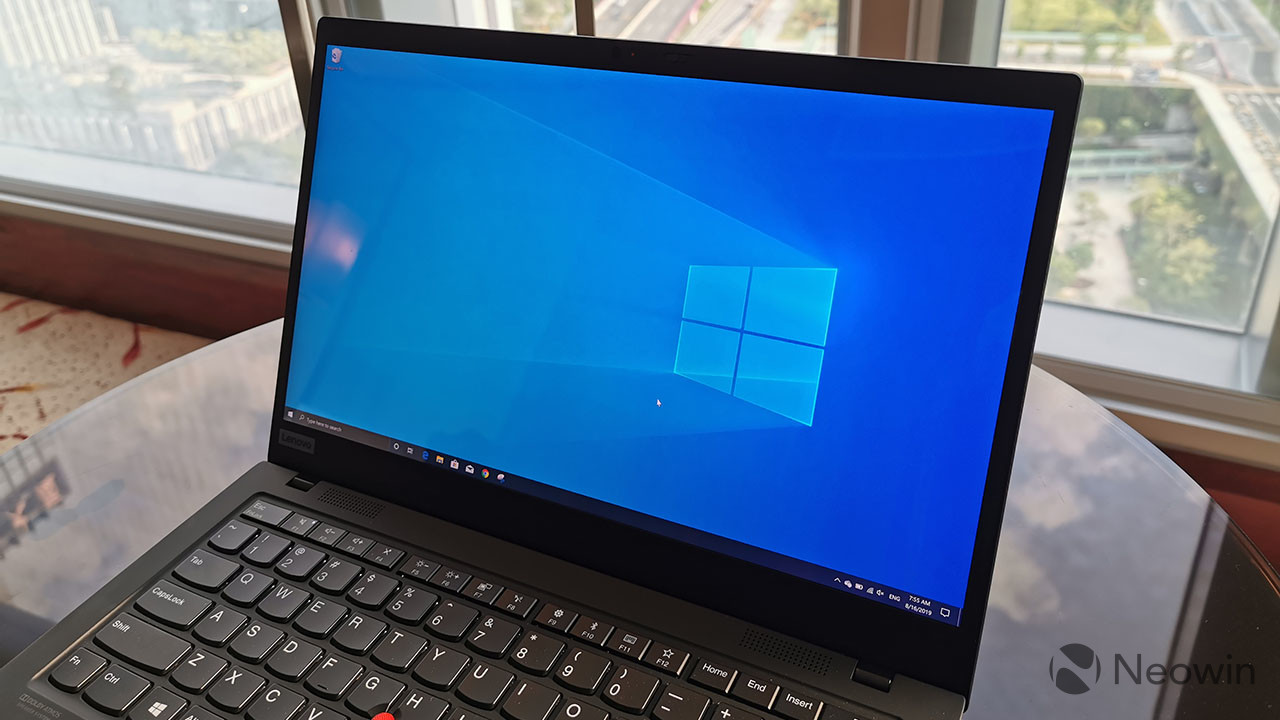 What you do get with the FHD model is better performance and battery life. A UHD display has about 8.3 million pixels, while FHD is only about 2.1 million pixels. That's a big difference in the amount of power needed for these displays.

That's why I was always a fan of the QHD (3.7 million pixels) model. In my opinion, you really can't see the difference between 1440p and 2160p on at 14-inch screen. I feel like only including Dolby Vision on the 2160p variant was a mistake here, since it's sucking down more power without any meaningful benefit.

But the screen is absolutely beautiful. The non-Dolby Vision models are probably more accurate, since the Dolby Vision screens tend to make things so vibrant that they appear oversaturated. Pretty is the word I'd go with. 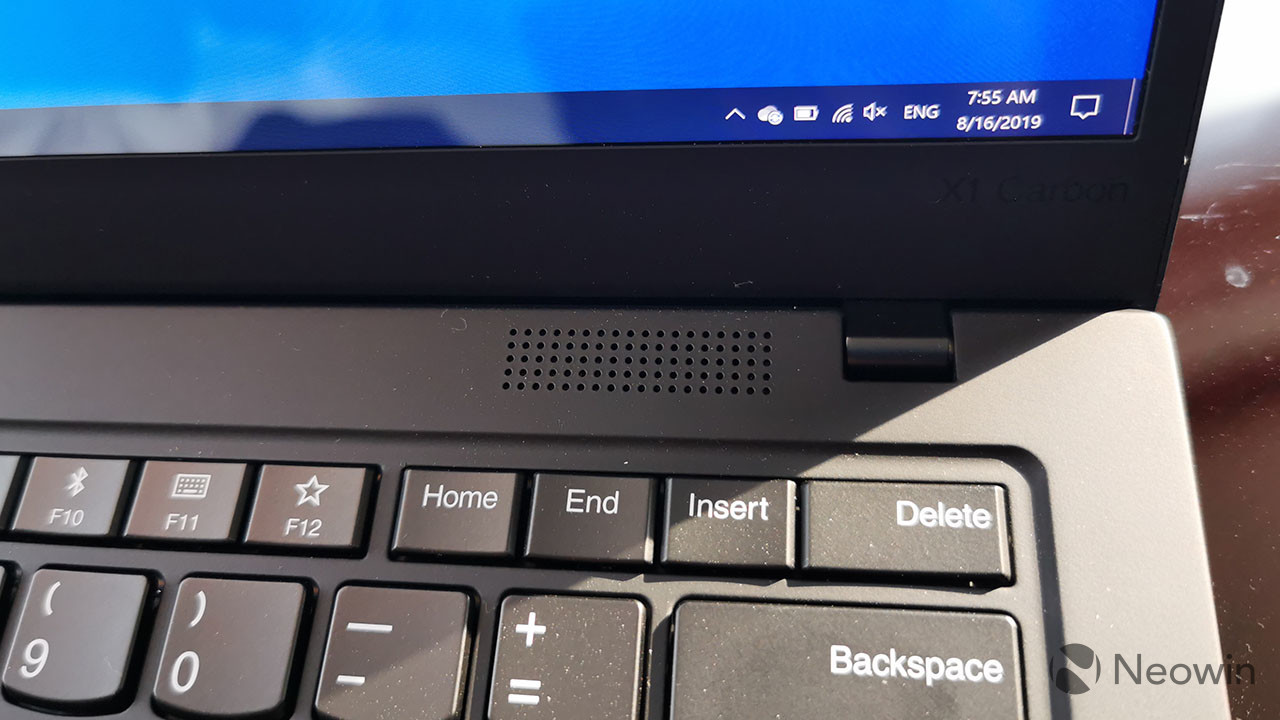 Audio quality is fantastic, something that I'm really pleased with. Two years ago, that was a real problem on ThinkPads, and I'm really happy to see Lenovo making that a priority.

The ThinkPad X1 Carbon includes two 0.8W tweeters above the keyboard and two 2W woofers underneath it. They all combine for audio that's both loud and clear. Listening to music while you're working on this PC is a great experience.

The bezels around the screen have been shrunken down with this generation, with a slightly larger bezel on top for the webcam and IR camera. It also has a larger chin, which serves to prop up the screen a bit.

As usual, the keyboard on the ThinkPad X1 Carbon is best-in-class. ThinkPads are famous for their keyboards, and for good reason. They're the Cadillac of keyboards. Comfortable, accurate, and responsive, I never have any problems with it. 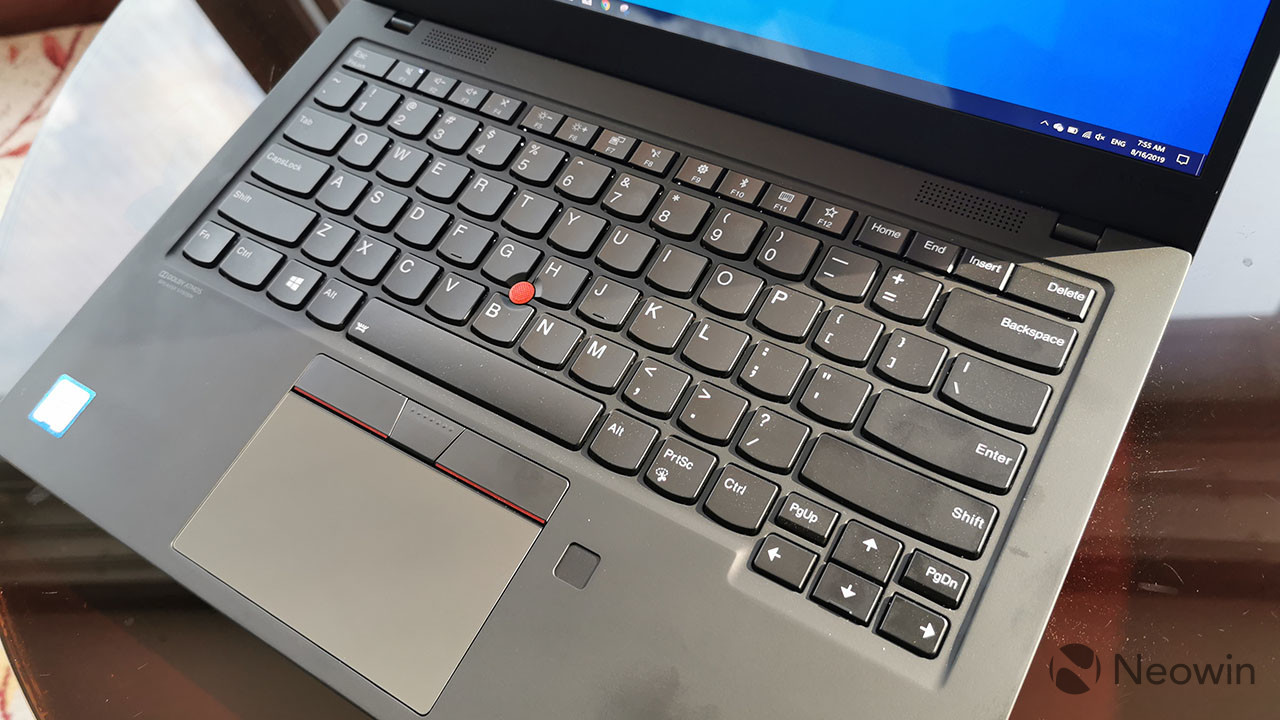 The keyboard has a deeper key-press than most modern ultrabooks, although you'll find one that's slightly shallower on the X1 Yoga. The resistance in the keys feels good though, and that's what's important. In general, you want more resistance on a shallower keyboard and less resistance while not feeling lose on a deeper keyboard. Lenovo gets it just right, and the keys aren't wobbly. 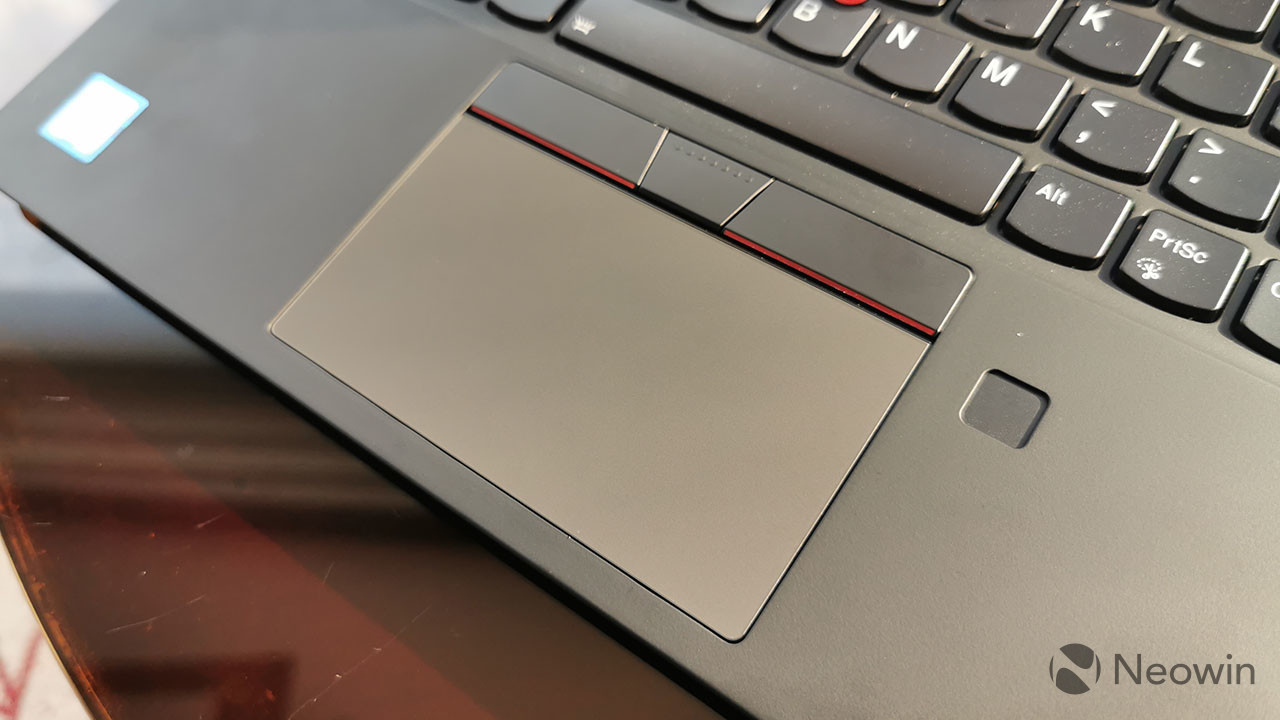 The trackpad itself is somewhat small compared with other laptops, and that's mainly due to those physical buttons. If you want a really large trackpad, this isn't it. I have to say though, I wouldn't want to give up those buttons. Few laptops have them, but I love them.

I have to say, I saw some pretty big differences between the two PCs in terms of both performance and battery life. The FHD model excelled in pretty much every area, while the 4K one struggled at times, especially for battery life. All of this will come across in the benchmark scores. 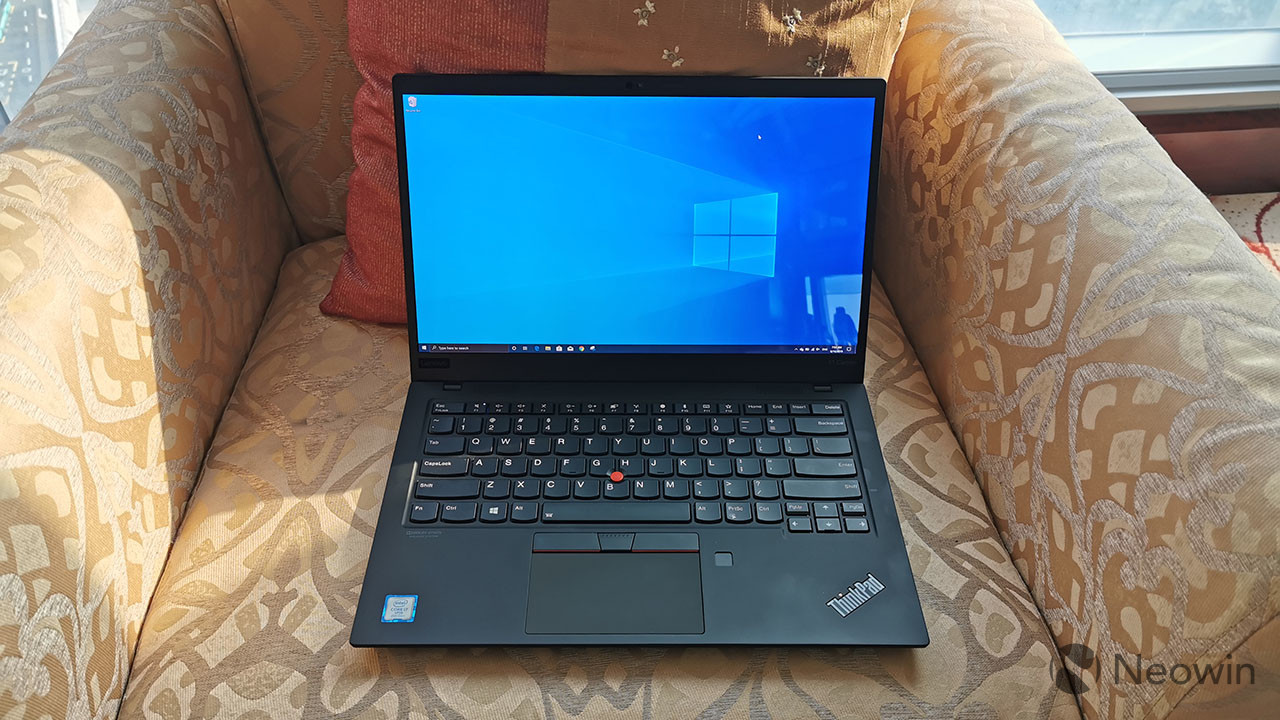 In general productivity use cases, both machines do great. My work mostly gets done in the browser. I did bring the 4K model with me to China for a week (that's Shenzhen in the background of the pictures), and since I had to use an unreliable VPN to access the internet while I was there, articles were written in Microsoft Word. But usually, I have a dozen or so tabs open in Chrome, with other apps like OneNote, Skype, Slack, and Microsoft To-Do open. In these scenarios, both units do great.

It was when I started to try video and photo editing on these that the difference in performance between the two devices became apparent. I'm not saying that the 4K model was showing poor performance - it wasn't - but if you put the two models side-by-side, you'll see it.

Battery life is also notably different in the two models, and that's one of the key reasons that Lenovo sent me both of them. On the UHD model, I got around four hours streaming Stranger Things (4K) on Netflix, and about five hours streaming Colony (FHD). On the FHD model, I got over 10 hours with both, although Stranger Things should stream in FHD on an FHD machine. 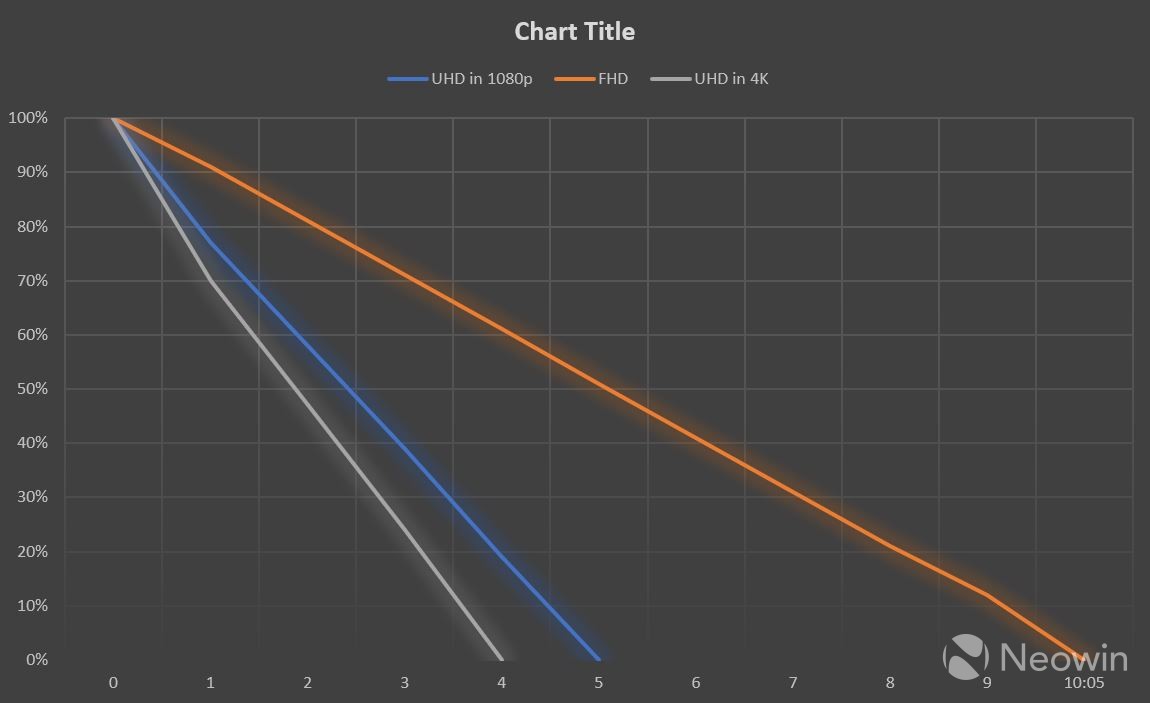 For benchmarks, I used PCMark 8 and PCMark 10. First up is PCMark 8, which provides three tests: Home, Creative, and Work. The Home test checks common tasks like casual gaming, video chat, and more.

As you can see, there's a significant difference between the two scores. The FHD one is about where I'd expect it to be. Next up is the Creative test, which checks more GPU-intensive tasks like video editing, mainstream gaming, and more.

In the Creative test, the difference between the two isn't as significant, although the FHD model still performs better. Finally, the Work test checks productivity-related tasks like writing and spreadsheets.

Again, the FHD model is the one that performs as I'd expect a machine with these specs to perform. I also ran the all-in-one test in PCMark 10 for those that like to keep score.

I almost feel like there's no much I can say about the ThinkPad X1 Carbon, because it's so good, but it's always been good. When talking about a business clamshell that's thin and light, look no further. And it's even lighter this year at an incredible 2.4 pounds.

My biggest issue is that Lenovo went and decided to put the good screen in a 4K model. I don't believe 4K is necessary on a 14-inch 16:9 display, and it's sucking down battery life. Two years ago, we had a QHD OLED option. Last year, they ditched OLED to everyone's disappointment and gave us QHD Dolby Vision. Now, it's just UHD Dolby Vision and QHD non-Dolby Vision. So which one would I tell you to get? I'm really not sure. 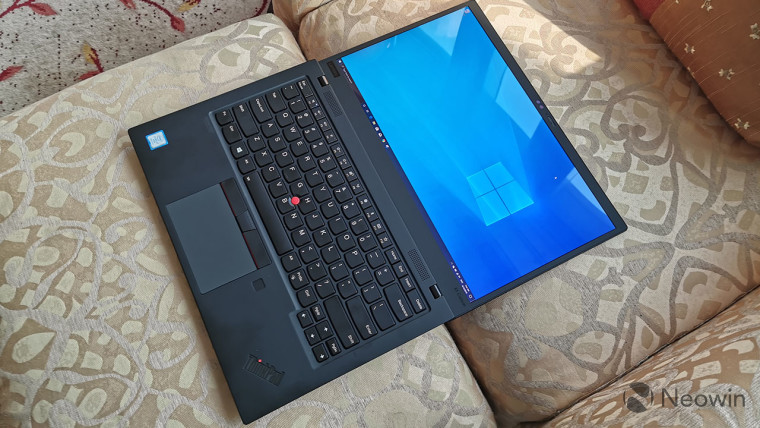 On one hand, you get the best battery life and performance from the 1080p model, but the prettiest display from the UHD model. Honestly, the QHD variant is probably the best balance between screen resolution, battery life, and performance. Of course, that's why I've always praised Lenovo for using QHD at the premium end rather than doing what HP does, which is to provide only 1080p and 4K options.

Disregarding the screen options that Lenovo provided this year, the X1 Carbon is once again the best at what it does. It has a phenomenal keyboard, and it fits in an even smaller footprint. It's one of the most pleasant laptops to use that there is.

Honestly, the fact that Lenovo is selling the top-end model right now for $1,999 is a great deal. You might want to check it out.