Lenovo announced its new lineup of flagship ThinkPad X1 PCs at CES. For the most part, they contain improvements upon the existing products, such as eighth-generation Intel processors and a privacy guard that's built into the webcam.

The company sent me the new X1 Carbon, and while other features like Amazon Alexa and Dolby Vision were announced, this unit contains neither of those. Alexa support will be coming later this spring, and Dolby Vision is only on the 1440p model.

But speaking of Alexa, these PCs do come with far-field voice microphones, which do support Cortana at the moment. Once Alexa arrives, you'll be able to say different wake words to use either voice assistant.

These are the specs for the unit that Lenovo sent me. Obviously, it comes in other configurations, as well as in Super Magnesium Alloy instead of carbon fiber.

As far as general usability goes, not much has changed in the design. The ThinkPad X1 Carbon still uses the same keyboard, with the round power button placed above it. There's a red trackpoint, and a trackpad with dedicated buttons on it. And of course, it's made of the carbon fiber material that ThinkPads are known for, and it's also where the device gets its name. 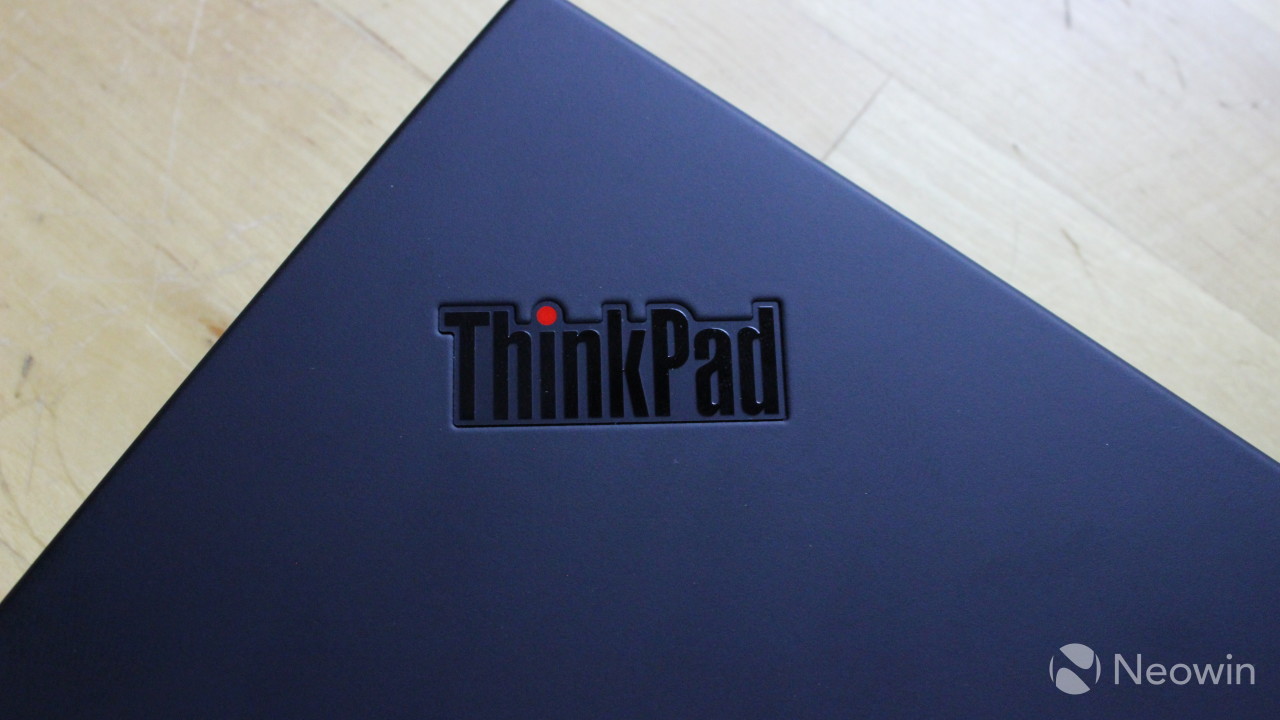 But if I told you that it looks the same externally, Lenovo would be really upset. The new round of ThinkPad X1 PCs has all-new branding. The ThinkPad logo is now a chrome color instead of the old grayish-silver, and the Lenovo logo on the lid has been replaced by a new X1 logo. 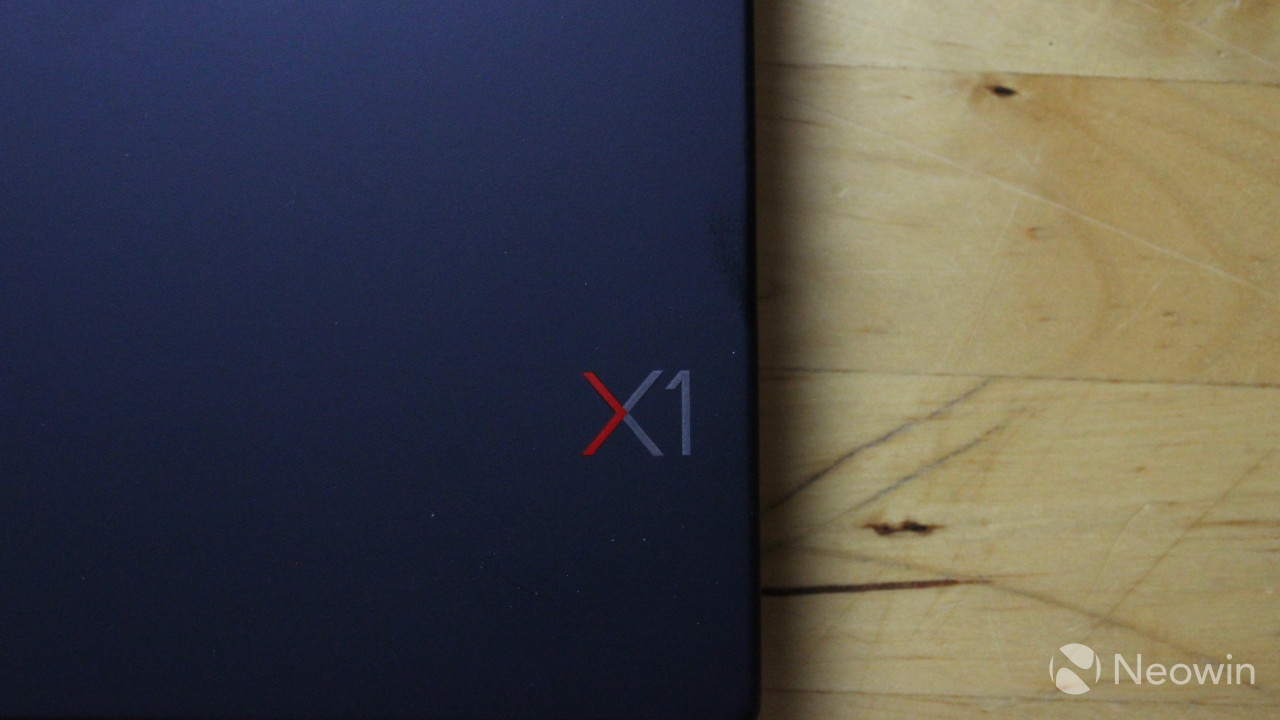 On the right side of the device is where you'll find the 3.5mm audio input/output jack and one USB 3.0 Type-A port. 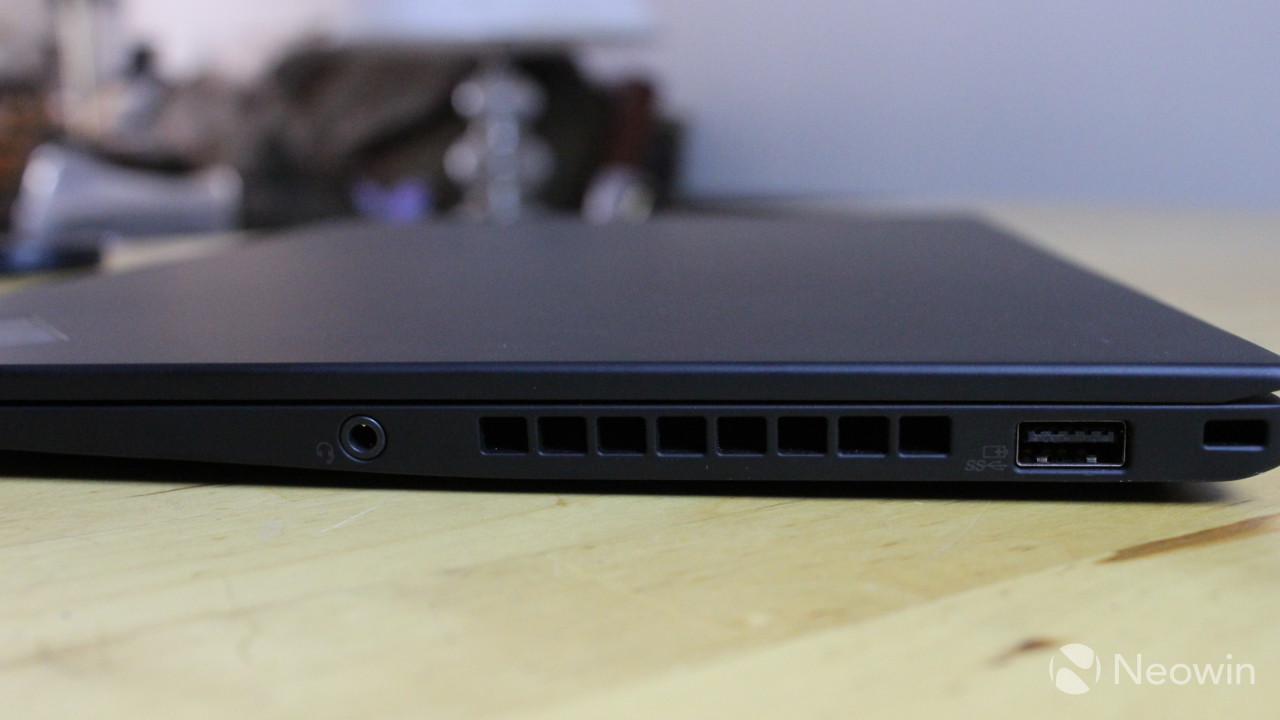 On the left, there's another USB 3.0 Type-A port, along with two Thunderbolt 3 ports and HDMI. Personally, I like this design because I'm right-handed. The Thunderbolt 3 ports are what's used for charging and various other things, and I'd prefer wires to be coming out of the left side of the device, since I usually have a mouse on the right side. Of course, you might feel the opposite way if you're left-handed. 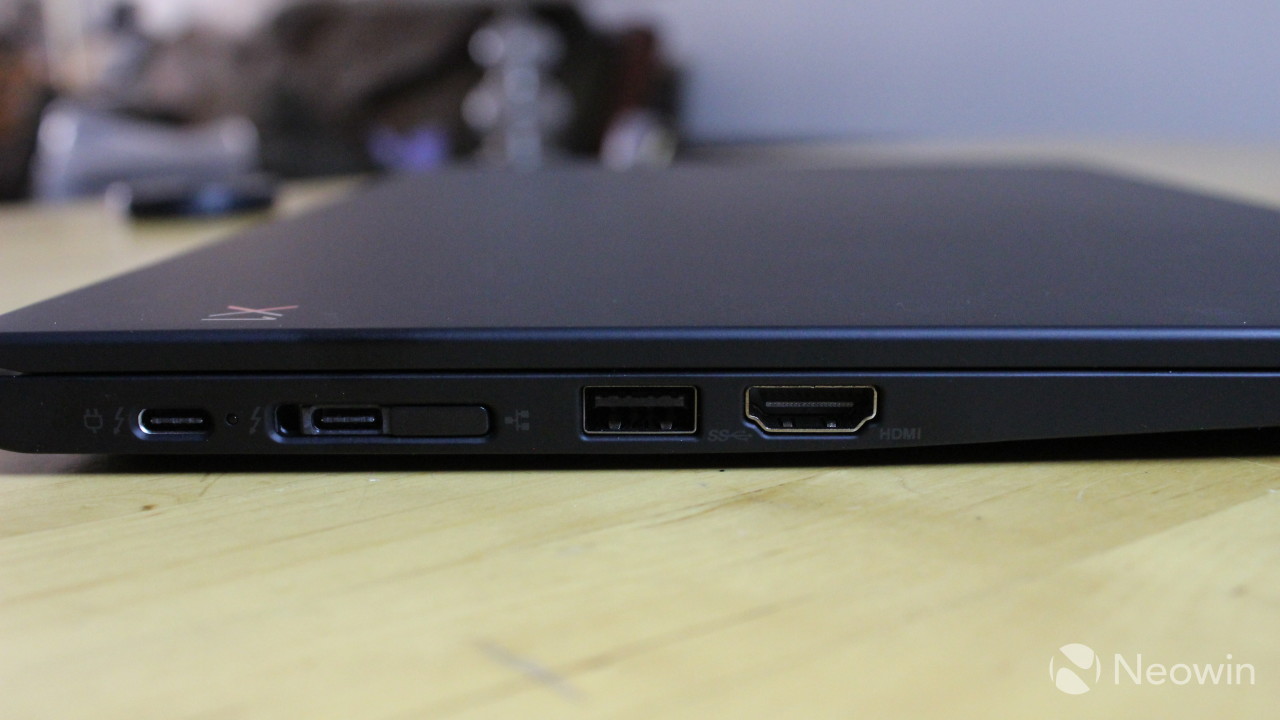 You can also see that one of the Thunderbolt ports is designed a bit differently. That's because you can also use it with the new ThinkPad Docking Station. Unfortunately, Lenovo didn't send me one of these, so I didn't get to test it.

The Lenovo ThinkPad X1 Carbon is a traditional clamshell laptop. If you're looking for a convertible, you'd want to go for the X1 Yoga, which is another product that I wholeheartedly endorse. But when Lenovo briefed me on the Carbon, the obvious question I had to ask was why anyone would buy it over the X1 Yoga. After all, the ThinkPad X1 Yoga has pretty much the same internals and specs as the X1 Carbon, but with the additional functionality that comes with it being a convertible.

The answer was that the ThinkPad X1 Carbon is thin and light, making it more portable, and comfortable to carry. Indeed, at 2.49 pounds, it's easy to throw the X1 Carbon in a bag and forget that it's there. 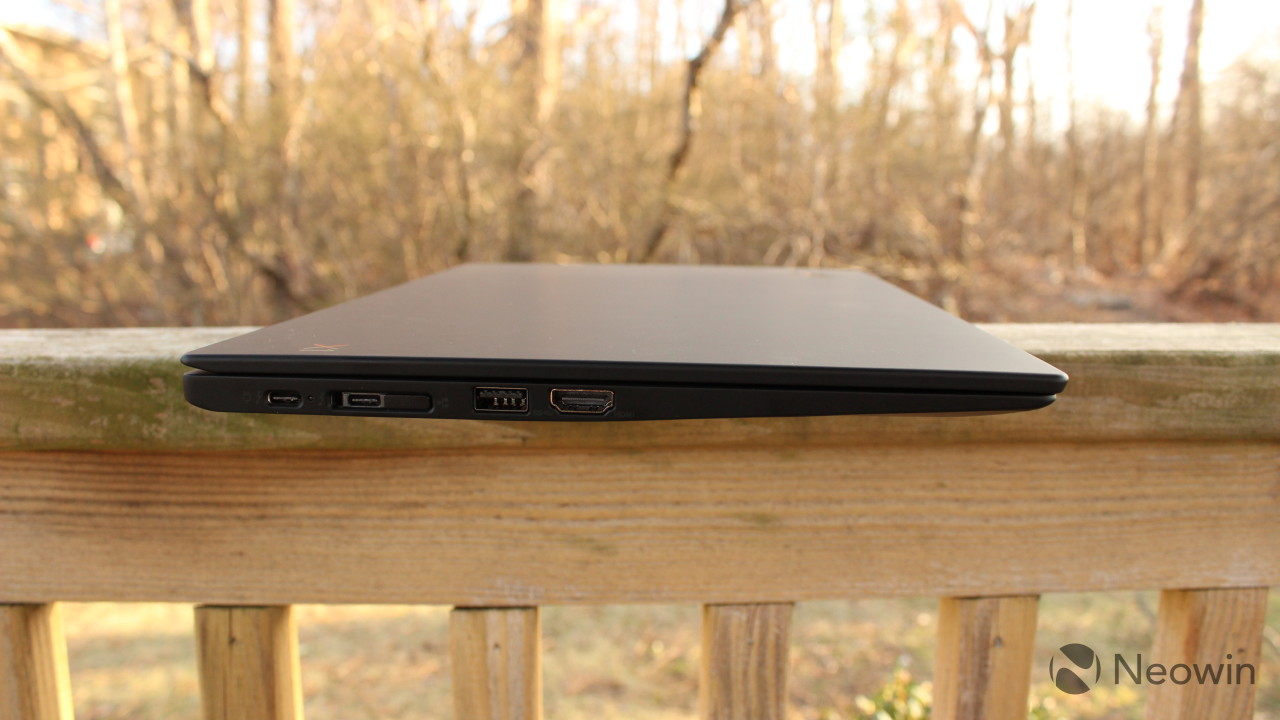 It comes in at just 15.95mm thin, and Lenovo says that it's the thinnest and lightest 14-inch business laptop on the market. But don't mistake that portability for weakness, because it's also tested to stand up to extreme conditions, as all ThinkPads are. It's MIL-STD 810G tested, which means that it can handle extreme temperatures, sudden shocks, and more.

As you'd expect, there are various display configurations on the ThinkPad X1 Carbon. It has a 14-inch screen that comes in 1080p and 1440p resolutions. I was sent the 1080p one, which frankly is the less interesting variant.

You can get the 1440p models configured with Dolby Vision, which I got to check out at CES. This is really a replacement for the OLED configurations that were available in last year's models, and while I did put them side-by-side at CES, I really want to get my hands on one to thoroughly test it out. 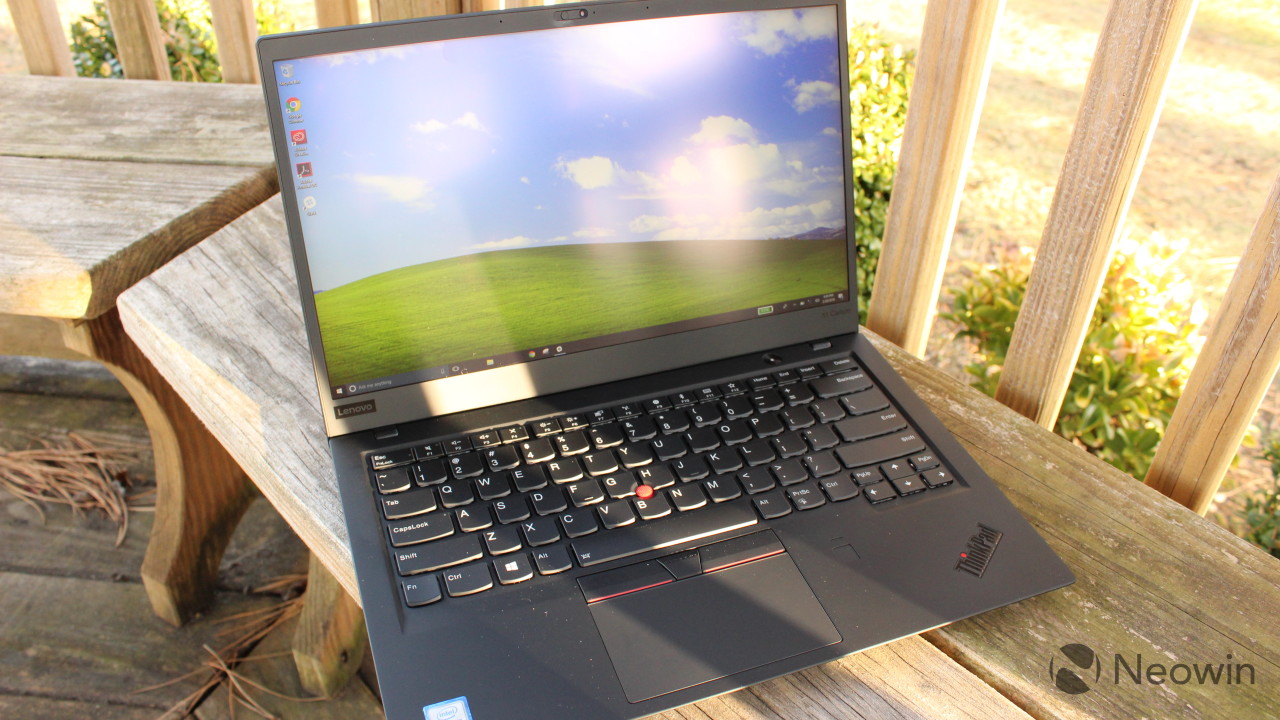 Of course, the 1080p model is nice as well. Lower resolution means better battery life, of course, and the X1 Carbon does perform for quite a while before needing a charge. I do prefer 1440p on a 14-inch display though, because you can still see just a bit of pixelation at 1080p.

The quality of the screen is quite nice though. It's a touchscreen, and I really love that it's anti-glare. The matte display is fantastic for working in bright conditions, and it also doesn't pick up fingerprints as easily as a glossy screen does.

Honestly, the keyboard is the highlight of the device for me when it comes to ThinkPads. They're my favorite PCs to type on, with the exception of how the Fn and Ctrl keys have swapped positions from where they'd be on most other machines. 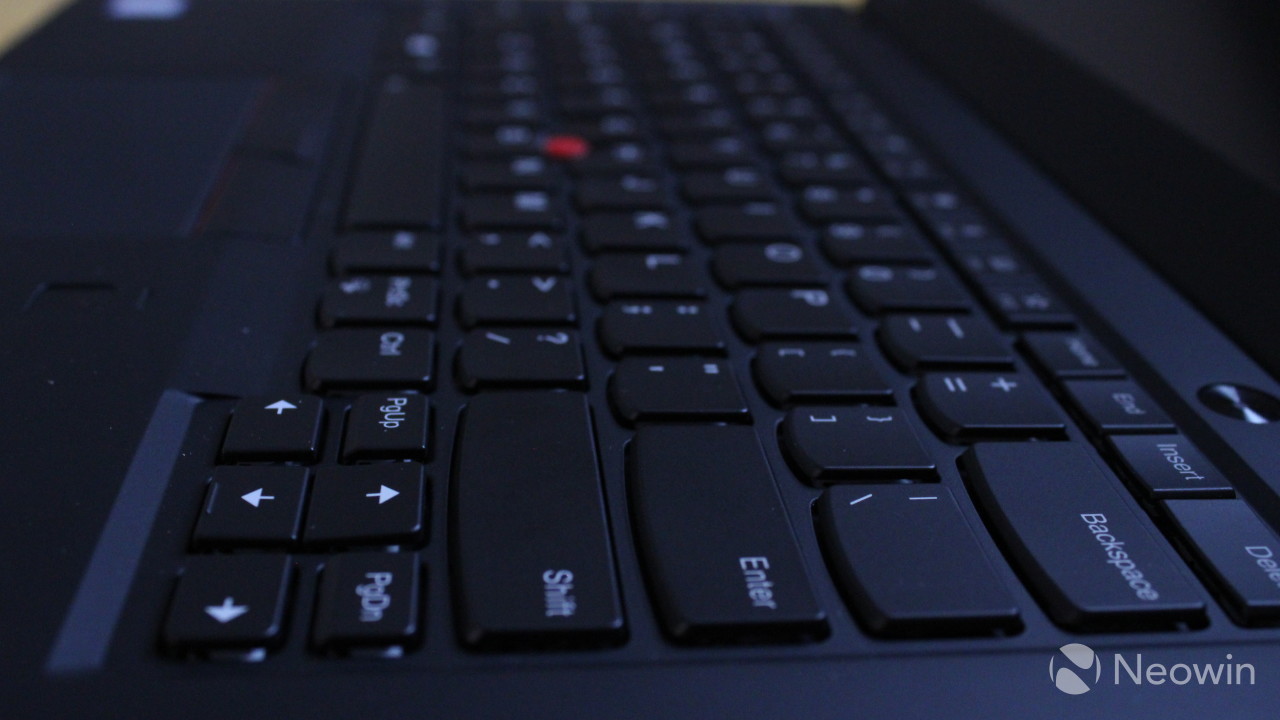 The carbon fiber material feels soft, and the keys have just the right amount of resistance. It's also a very quiet keyboard, which is great for someone like me because I'm told that I'm a loud typist.

Obviously, the keyboard is very important to me because I spend the bulk of my time writing articles. To me, a keyboard that I feel comfortable typing on is priceless. 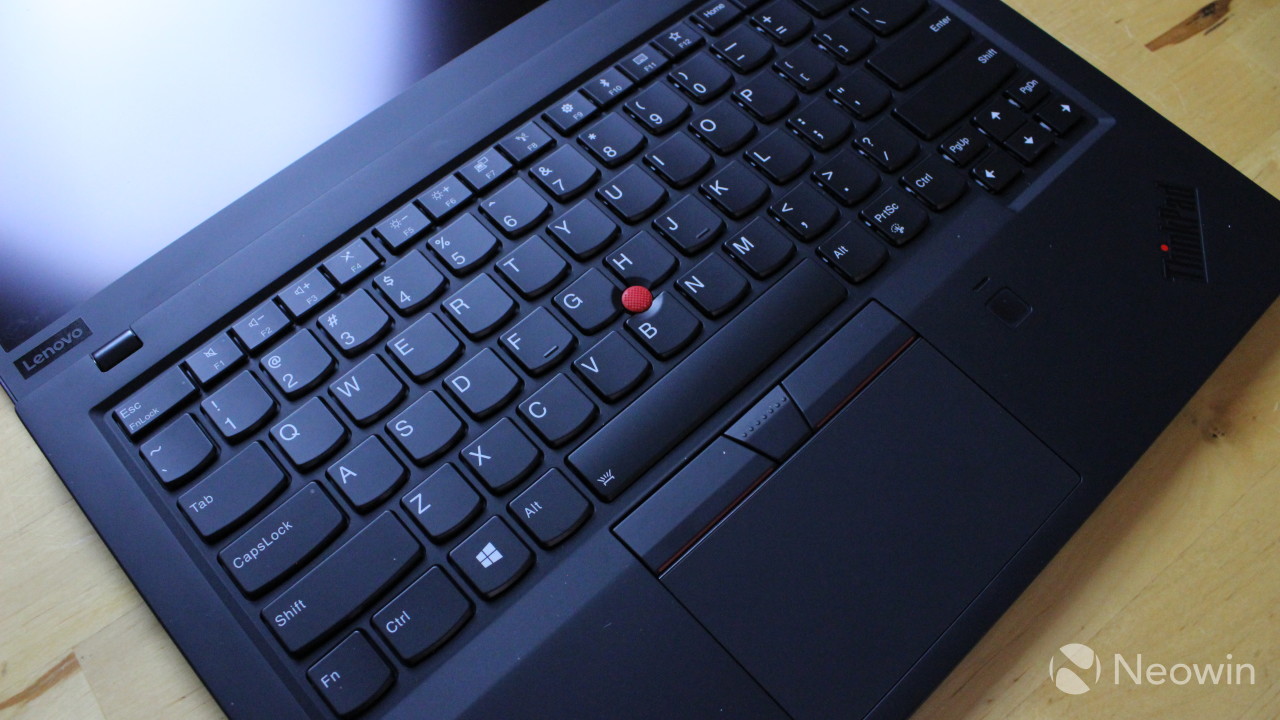 Of course, the ThinkPad X1 Carbon comes with the red trackpoint underneath the G and H keys. This controls the cursor, and you can click by using the dedicated buttons above the trackpad. Personally, it's not my cup of tea, but it's been a part of ThinkPads for 25 years, so obviously there are some people that use it.

The biggest issue that I take with the Lenovo ThinkPad X1 Carbon is that the user is forced to choose between an IR camera for Windows Hello and the privacy guard on the camera. You can't have both. 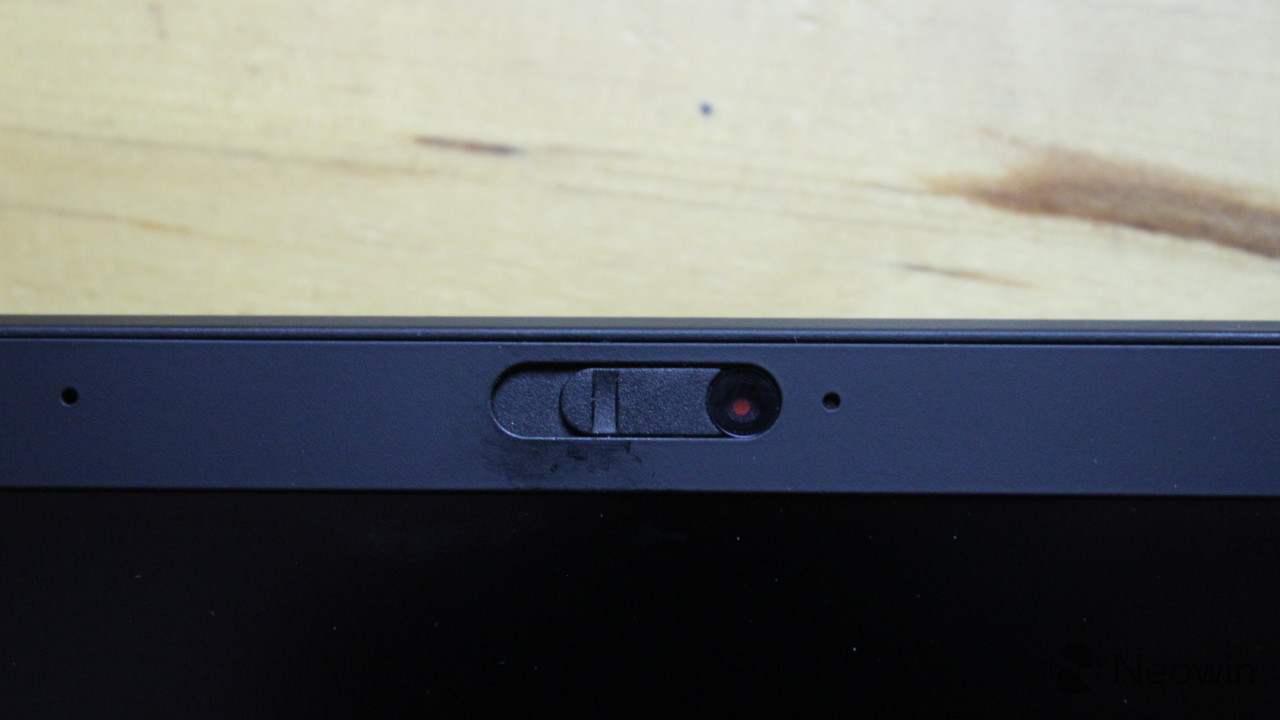 The ThinkShutter privacy guard is pretty cool, and stuff like this is becoming more and more popular in new PCs. You'll no longer have to put a piece of tape over your camera, because you can just flip a switch to block it. I like using it during virtual briefings, just in case I accidentally open the camera.

But if you choose one of the variants with an IR camera, you don't get ThinkShutter. Lenovo told me that the reason for this was because the logistics of doing both were too complicated, so hopefully the team gets this worked out before next year when it launches the next generation.

That doesn't mean that you lose Windows Hello though, as you still get a fingerprint reader. 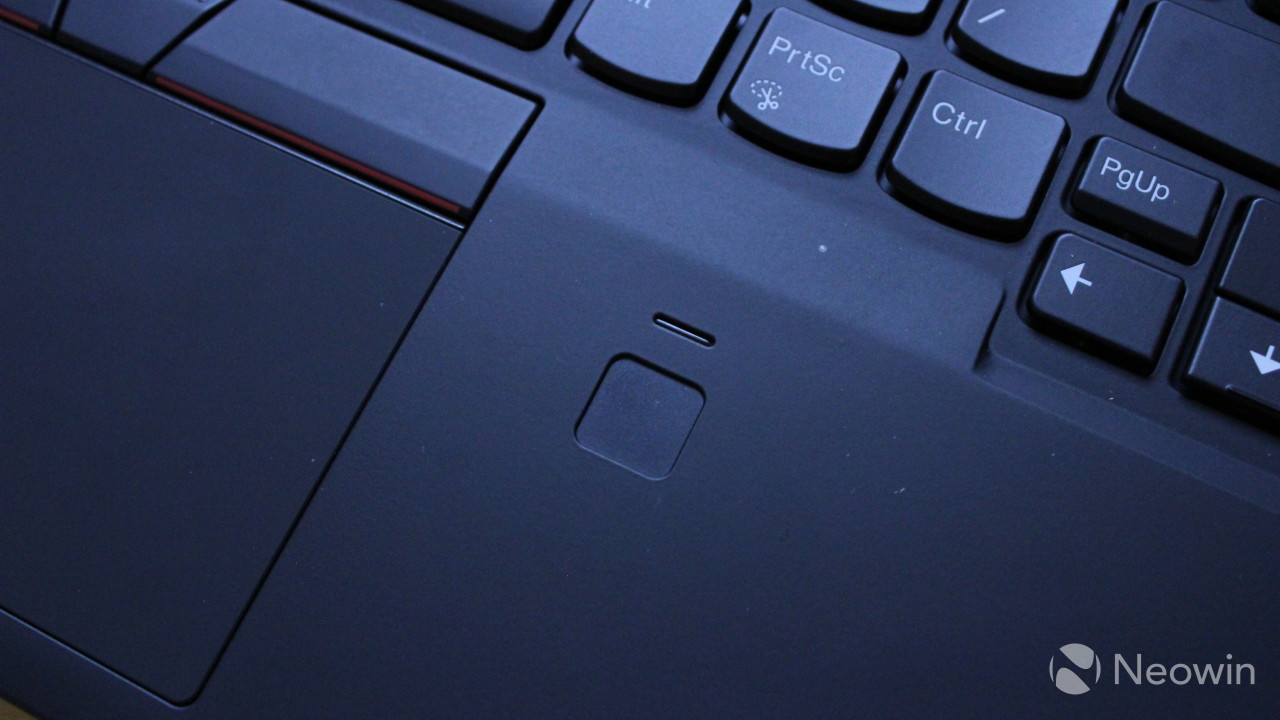 Fingerprint sensors have been what ThinkPads have used for biometric authentication for years now. Personally, I think facial recognition is better and more natural, since your PC just sees you and logs you in, so I'm still excited to see Lenovo beginning to embrace this on ThinkPads.

The biggest change since last year's round of ThinkPads is that these now contain Intel's eighth-generation U-series processors. They're still built on the Kaby Lake architecture, but for the first time, the U-series is quad-core, rather than dual-core.

This is quite significant in a number of ways. For the first time in a while, Intel is providing a notable performance increase in its new generation of processors. Other than a 30% boost (depending on your workload), the additional cores come in handy when running virtual machines. The ThinkPad X1 Carbon ships with Windows 10 Pro, so that means you get Hyper-V included with that.

There's also no dedicated GPU, as it uses Intel's UHD Graphics 620. Integrated graphics work differently from a dedicated GPU in that it shares graphics memory with system memory. In other words, if you're really into gaming or video editing, the ThinkPad X1 Carbon is not the machine for you. This doesn't mean that you can't edit video, but rendering times will be longer than if you had a more powerful rig. Also, more casual games like Cuphead will be fine, but don't plan on playing Gears of War.

For benchmarks, I used PCMark 8, which offers three tests: Home, Creative, and Work. This is helpful in deciding the device's strengths and weaknesses. The first test is Home, and that checks things like video chat, web browsing, casual gaming, and more.

The results are right about where I'd expect them to be from a Core i7-8550U, if not even a little better. Next up is the Creative test, which checks more GPU-intensive tasks like video editing, advanced photo editing, and mainstream gaming.

The results on the Creative test are actually quite good, considering the lack of a dedicated GPU. The last test is Work, and that checks productivity-related tasks like writing, spreadsheets, and video chat.

I'd have thought that the ThinkPad X1 Carbon would have performed better on the Work test, given that it really feels like it's engineered for productivity. Still, I haven't has any issues with it at all during my daily usage of it.

Lenovo has never let me down on a ThinkPad before, and it hasn't started now. The ThinkPad X1 Carbon is an excellent device in every way, and if you're looking for a premium business clamshell laptop, look no further. In fact, you can even remove the 'business' from that last statement, because if you're willing to pay the money for them, ThinkPads also make excellent consumer devices.

The new ThinkPad X1 Carbon is super light at under 2.5 pounds, contains powerful new Intel processors, and it has a privacy guard on the camera. But all of that aside, it's just a really pleasant and comfortable PC to use, and that's my experience with all ThinkPads.

As I mentioned earlier, my biggest complaint is that the customer is forced to choose between the privacy guard on the camera and the IR camera for Windows Hello. Hopefully you'll be able to have both in the next generation, because they're both great features.

If you're looking for a thin and light laptop, this is it. Considering that it has a 14-inch display, the weight of this laptop seems unreal. However, if you're looking for a convertible that you can use a tablet, you'll want to check out the ThinkPad X1 Yoga. We'll be reviewing that next, so make sure to check back soon.