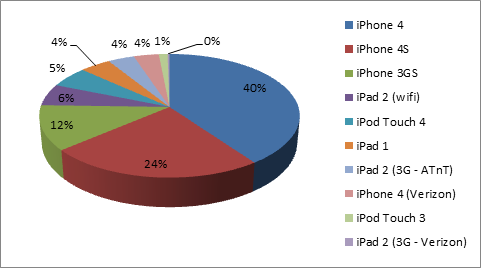 And apparently iPhone and iPad users are taking advantage of this fact with Jones writing that since the launch of iOS 5 in October over 2 million people with iOS-based products have connected to Hotmail through those devices with 100,000 new users added each day.

As you can see in the chart above, a combined 64 percent of Hotmail iOS users have either an iPhone 4 or the new iPhone 4S, with another 12 percent using the iPhone 3GS. The rest of the iOS-based products, including iPads, are in the single digit percentage numbers on the chart for using Hotmail.

The blog points out that other mobile products based on Android, Nokia and Blackberry platforms can also connect to Hotmail. Of course that also included Microsoft's own Windows Phone 7 client. However it is a testament to Hotmail's success that nearly all smartphone and tablet products can connect to Hotmail in some way. Indeed, a couple of weeks ago a new and free Hotmail app client launched on the Android Marketplace.