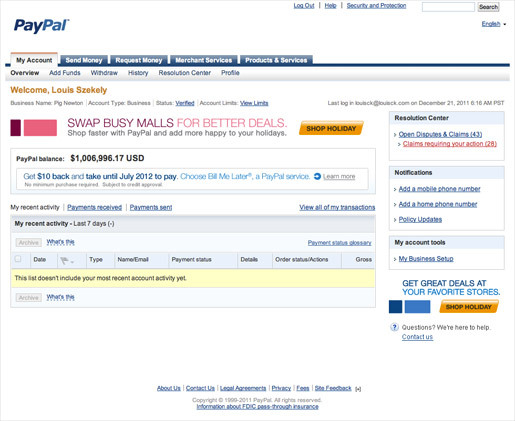 Last week comedian Louis CK said that a $5 video of one of his recent comedy concerts had already generated $200,000 in profits and $500,000 in revenues after just two days of sales at his web site. Now he's given an update on those Internet sales and the results continue to impress. He states that on Wednesday revenues actually went over the $1 million mark after 12 days of the video going live on the site. He even posted his PayPal account page to prove it.

Louis CK has already announced that the revenues from the video, which had no DRM protection, have already paid for the cost of the video's production along with the costs of building of the web site. He says now that he is breaking up the $1 million into four pieces. The first $250,000 will, as reported before, be used to pay for the video's production. He will also give $250,000 to the people that worked with him on the concert as well as his FX comedy series Louis as bonuses. He's keeping $220,000 for himself.

The final $280,000 will be given out to five different charities that are listed on the web site. He claims that he will give out even more money to charity if the special makes another $1 million. He states, "I never viewed money as being 'my money' I always saw it as 'The money' It's a resource. If it pools up around me then it needs to be flushed back out into the system."

You can bet that other comedians and entertainers are looking seriously at Louis CK's business model for releasing original web video content. It seems likely that we could see others releasing original material in this manner in the very near future.