Microsoft’s Lumia 630 has been gradually making its way across the globe in recent weeks, with launches so far in numerous markets, including India and parts of Europe, including the United Kingdom. The 3G handset will also be joined in some parts of the world by its 4G-enabled sibling, the Lumia 635.

But a third model – and one that has not been previously announced – has been spotted in China, as Windows Phone Central reports. The Lumia 638 is unique in certain aspects of its specs, differing from the 630 and 635 models seen so far. 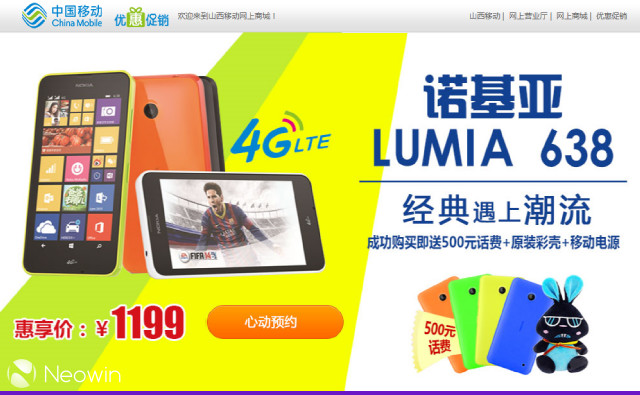 Other than those differences, the Lumia 638’s specs seem to be identical to its sister devices, with a 4.5-inch display, quad-core 1.2GHz Qualcomm Snapdragon 400 chipset and 5MP rear camera – and, of course, Windows Phone 8.1. The 638 is available to pre-order on Shanxi Mobile, a subsidiary of China Mobile, with a price tag of 1199 CNY (around $192 USD).

The 638 is likely to be exclusive to China, and would not be the first unique variant of a Lumia handset to be offered there. The Lumia 920T, for example, launched there with a faster GPU than the international version of the 920; Nokia also came close to offering a China-specific model of its Lumia 710, which would have been known as the Lumia 719C, but it was cancelled before it was officially announced.

A localised version of the Lumia 630 was launched in Brazil last month, featuring integrated digital TV – a feature not yet seen on any models in the 63x series in other markets.