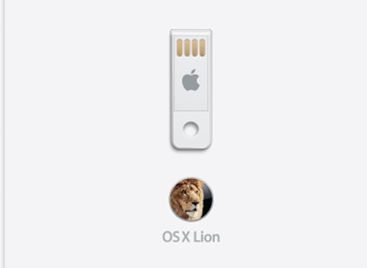 A few weeks ago, Apple released its "Lion" update to its Mac OS X operating system. This major update is included in all new Macs, but if you have a older hardware, you can still update to the new "Lion" version via a download from the Mac App Store. Apple said that the Lion update was purchased and downloaded a whopping 1 million times in just its first day of release last July.

But there may be some people who don't care for this "download" business model and want something more "real" when they update their Mac OS X software. For those folks, Apple has now launched its promised "Lion" update on its online store via a USB thumb drive that is mailed to the user. While Apple's Lion USB drive is certainly a bit more stylish than the normal thumb drive, you will be paying a rather large premium to get the software update in this fashion. The USB version of Mac OS X Lion is priced at $69, well over twice the amount of the downloadable version.

If you feel uncomfortable updating your older Mac or MacBook Pros via either method, you still have one other option available to you. If you live near an Apple retail store, you can drive to the store with your Mac and purchase the Lion update. You can then download and install the update to your Mac directly from the store. Of course, you will have to deal with all those people wandering around ...