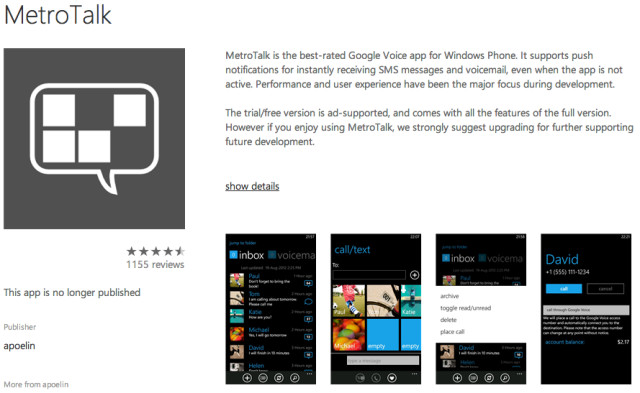 While we knew it was coming, the day has finally arrived: MetroTalk is dead. The unofficial third-party Google Voice application has finally been pulled from the Windows Phone Store and the app is no longer functioning.

In October, citing security concerns, Google changed its Terms of Service that revoked third-party access to its Google Voice service. While the changes weren’t immediate, Google did caution that service on third-party apps would cease on May 14, 2014. A week later, the MetroTalk blog announced that it would be discontinuing the application. The blog post stated that the app would be supported for another six months and that it would be removed from the WP Store on May 1, 2014.

As May 1st came and went, the app continued to function and remained on the WP Store. Could MetroTalk have slipped through the cracks? Sadly, no. As of May 26, 2014, the application has been pulled from the Store and is no longer functioning. While Windows Phone and other third-party Google Voice users are left stranded, it seems like the only solution - in lieu of an official Google Voice app - is to access the service via the website.