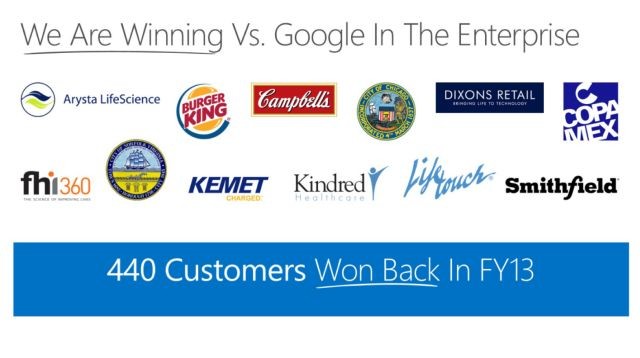 In August, Microsoft published a article on its official Office blog from some IT consultants who claimed that they were "seeing customers flee Google Apps for Office 365." Today, as part of the company's financial analyst meeting, Microsoft claimed that lots of companies were switching from Google Apps back to Office.

The presentation, as given by Microsoft chief operating officer Kevin Turner, indicated that 440 companies and organizations have switched from Google's solution back to Microsoft during the last fiscal year. A slide that accompanied that note showed logos from some of those businesses, including Burger King, Campbell's, Dixons Retail and more.

Of course, we don't know how many customers Microsoft might have lost to Google Apps, but the fact that the company is hyping up this bullet point to analysts shows how much Microsoft wants to keep its Office division thriving in spite of growing competition. Indeed, earlier today Google announced it was making its Quickoffice apps for iOS and Android, which can edit Microsoft Office documents, free to download and use.

However, Microsoft also announced in another part of its analyst meeting that it was working to bring more touchscreen version of Office to Windows and other devices.