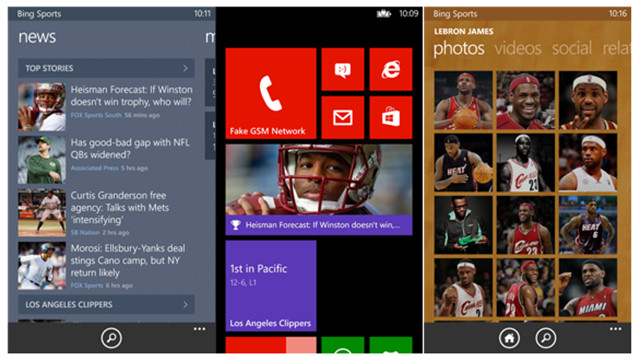 Microsoft launched versions of its various Bing apps for Windows Phone 8 several months ago and today the company issued a new update for one of them, Bing Sports. The new version offers up some customization features for the hardcore sports news fan.

The app, available in the Windows Phone Store, now supports a way for users to personalize his or her updates on to track favorite sports and teams. If you care about a specific athlete, the app now lets users check for the latest news, Twitter updates and more for popular sports personalities. Live tiles in Bing Sports can now be customized so that they display completed, live and upcoming games from a user's favorite team. The ability to share stores via email has also been added. Finally, the app offers up more details on NFL and NBA leagues as a whole, along with a number of soccer leagues.

So far there's no indication that any of the other Bing apps for Windows Phone (News, Finance and Weather) have also gotten any major updates. It's possible that Microsoft wanted to push the new Bing Sports version out so it would be ready for Super Bowl 2014 on Feb. 2.