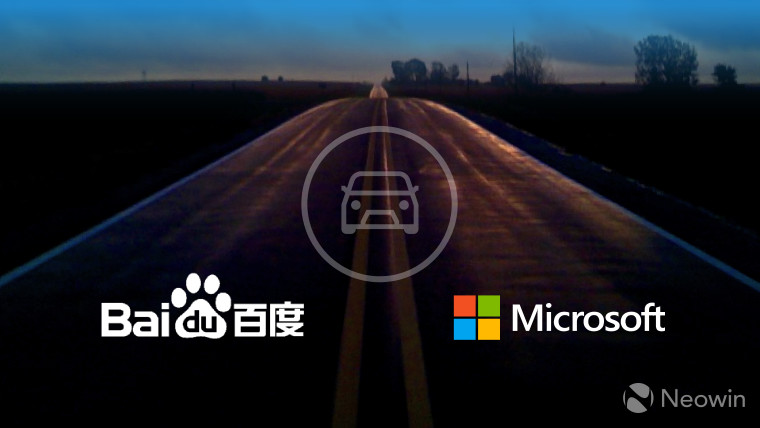 Microsoft and Chinese search giant Baidu have announced a new partnership, in which the two companies will work together "to take the technical development and adoption of autonomous driving worldwide."

Both firms are part of the Apollo alliance, founded by Baidu earlier this year, and described as an "open platform that provides a comprehensive, secure and reliable solution that supports all major features and functions of an autonomous vehicle." Over 50 companies around the world are now part of the alliance, including Microsoft, TomTom, Bosch, and Continental.

The Apollo platform brings together cloud services with an open software stack, to further development of reference hardware and vehicle platforms. The shared goal of these companies is to make these resources available to the automotive industry, to help bring safe self-driving vehicles to market more quickly. According to research from McKinsey, up to 15% of cars sold by 2030 will be autonomous, and companies worldwide are eager to grab a piece of the still-nascent market for such vehicles.

Microsoft's role in Apollo will be to provide 'global scale' for the platform outside of China through its Azure cloud. Microsoft corporate vice president Kevin Dallas said today:

We're excited to partner with Baidu to take a giant step in helping automotive manufacturers and suppliers fully realize the promise of autonomous driving.

Today's vehicles already have an impressive level of sophistication when it comes to their ability to capture data. By applying our global cloud AI, machine learning, and deep neural network capabilities to that data, we can accelerate the work already being done to make autonomous vehicles safer.

Microsoft has already been working closely with some of the world's top auto-makers in recent months, including BMW, Volvo, and Renault-Nissan.