Microsoft has just announced a $1 million in-kind partnership with the U.S. Department of State for its upcoming United States Diplomacy Center, an interactive museum and educational center devoted to highlighting American diplomacy and foreign relations both at home and abroad.

Microsoft's partnership will consist of technology designed and implemented in collaboration with the U.S. Diplomacy Center, which will eventually be constructed at the National Mall in Washington, D.C.. Microsoft plans to implement a combination of uniquely developed hardware and software to bring an interactive experience to the museum.

The plans are still in the works, but Microsoft highlighted what it called the "Diplomacy is Everywhere 24/7" exhibit -- a large, interactive touch-screen wall which will allow museum visitors to be engaged in real life diplomacy scenarios, from peace talks to civil unrest and even public health crises, using Bing Maps.

"We are coming into this project hoping to explain why diplomacy is important and why American diplomacy benefits lives," said U.S. Diplomacy Center Senior Advisor Judith Bryan. "We look forward to working with Microsoft in developing this and planning interactive scenarios so people can step into the shoes of international diplomats."

Microsoft's partnership with the museum, including their hardware and software contributions, will also include strategically placed Surface Hub touch screens which will allow visitors to utilize diplomacy in solving diplomatic scenarios that affect America and the rest of the world. Visitors will be able to speak in near real time with other visitors in their native languages by using Skype Translator, which translates speech from a variety of different languages. 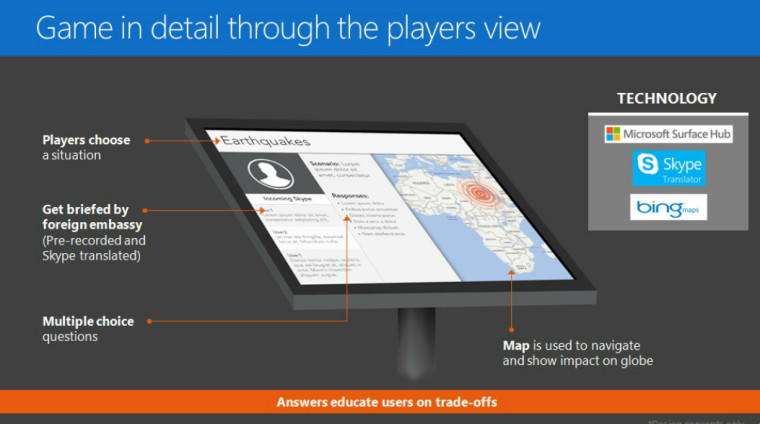 Both Microsoft and the State Department's Diplomacy Center say they hope the partnership will demystify and promote American diplomatic relations at home and abroad.

"Our men and women in the foreign service work tirelessly every day to further the interests of America," said Mark Penn, Executive Vice President and Chief Strategy Officer of Microsoft, "but their efforts often go unrecognized by the public. The Diplomacy Center is dedicated to telling that story, and Microsoft’s contribution will bring that to the forefront."

The Diplomacy Center museum is slated for opening some time in 2017. Visitors to the National Mall in Washington, D.C. can expect Microsoft's technology and its in-kind donation to be a huge focal point of the museum's "gamified" diplomatic experience.