In a completely unprecedented move, Microsoft has asked users on Reddit to submit their opinion on their new browser, Internet Explorer 9 which was released in beta form yesterday.

Microsoft has been running an advertising campaign for IE9 on Reddit, but has taken the next step and has actually asked for users to let them know how they feel about IE9 -- essentially tapping into the "hivemind" for bug reports -- this kind of move has not been seen before from a large software company.

The ads are simple, without any "marketspeak" and directly say that Microsoft wants reddit's feedback; 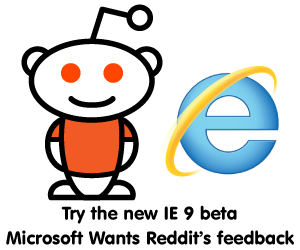 The Reddit team posted saying that Microsoft had "taken the unprecedented step of putting the reddit team in charge of this entire campaign" and have "reached out to us because they genuinely want to start a dialog with the reddit community." If you visit Reddit regularly, you know this isn't normal behaviour - as the post points out "we normally don't introduce new campaigns" but "this one is notable because the advertiser actually seems to understand what reddit can offer that traditional advertising."

The posts have well over 3000 comments as of writing, with users providing bugs, liked and disliked features and general opinions on the browser. Users are responding positively to the move too, with comments stating:

"I am overjoyed to hear they are listening to the community...I have a couple compliments as well as criticism to give"

The Reddit team say that Microsoft employees will be responding to comments on the browser where they can.

It's entirely possible that this could be the method that large software companies use to gather feedback in future, by getting normal users (rather than just those based in IT) to give their opinion on the product too, as the large percentage of browser users are not based in IT.

Microsoft has it's own bug and feedback website -- Microsoft Connect -- but it generates nowhere near this amount of feedback in only 24 hours.