Last month Microsoft let go 1400 workers as part of their plan to lay off 5000 people over 18 months and of course with most redundancies there was some sort of severance pay, but it seems Microsoft thought the money given was just a bit more then they had desired.

Techcrunch got access to a document that was sent out to some of the workers who were let go, instructing them that due to an accounting error, they will need to pay back some of the money that they received. Microsoft says that employees who have been sent letters (many of which are unemployed at the moment) have 14 days to return the money.

"An inadvertent administrative error occurred that resulted in an overpayment in severance pay by Microsoft. We ask that you repay the overpayment and sincerely apologize for any inconvenience to you." Microsoft has asked. 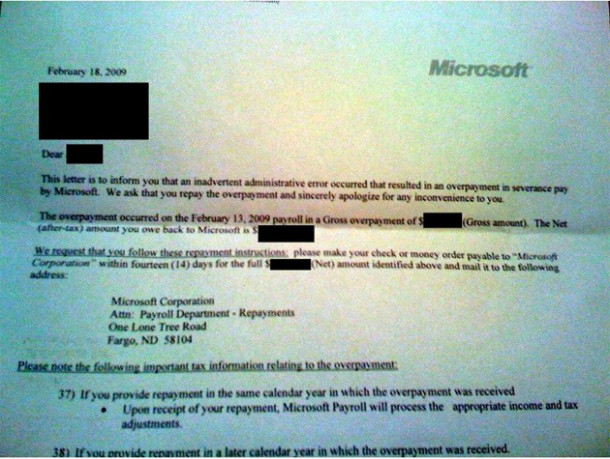 When Microsoft was contacted to see if the letter was indeed genuine they admitted it was, but said the matter would be discussed behind closed doors and not in the public domain. There is no word on how much the overpayment actually was, or how many former employees were contacted. Microsoft say those who don't decide to pay it back could face some monetary fines.

This is a further blow to the workers who were released by Microsoft last month.