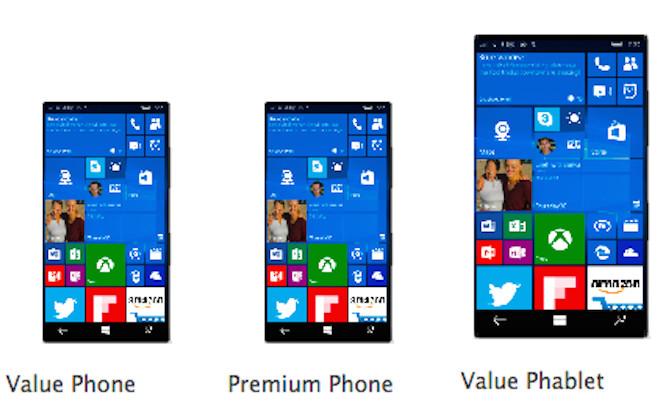 Microsoft first released a preview of its new mobile OS, Windows 10 Mobile, to Windows Insiders in February 2015. Since that time, there have been countless builds leading up what many to believe is the intended official debut of Windows 10 Mobile in October. As we get closer to Microsoft's October event, a new posting has been discovered that shows how Microsoft will compartmentalize Windows 10 Mobile smartphones with three recommended device types.

According to the document, Microsoft recommends three Windows 10 Mobile smartphone categories: Value Phone, Premium Phone and Value Phablet. For each of these categories, Microsoft has a guideline of what kind of specifications should be found in each of the device types. Naturally, this is similar to what Microsoft has published before with Windows Phone 7 and Windows Phone 8. While it is likely that the initial batch of devices will fall under these recommendations, the requirements and specifications will no doubt evolve as newer parts are made available.

Microsoft is expected to unveil the Surface Pro 4, a few Lumia flagships and possibly other Lumia handsets at its October 6th event.