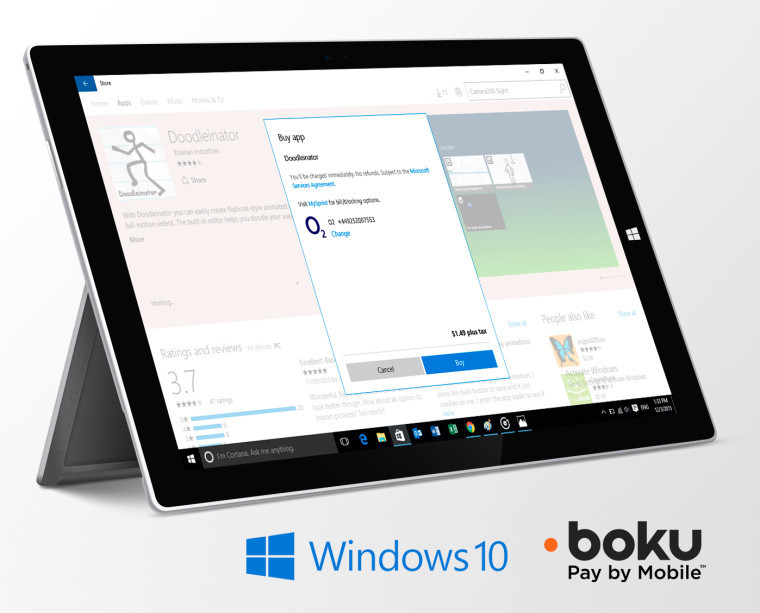 Microsoft is expanding its carrier billing support in the UK and Italy thanks to a continued partnership with Boku, a company that enables carrier billing. Windows 10 users will be able to purchase apps, movies and content, and charge that to their mobile phone number on certain carriers, instead of their credit cards.

Last year, Microsoft introduced carrier billing for its universal Windows 10 Store in the US. This allowed customers on Sprint to charge their purchases directly to their carrier contracts. Now, more than one year later, Microsoft has continued to expand those capabilities in new markets around the world, including Germany and Switzerland. As of today, O2 customers in the UK and Wind customers in Italy will get to use the same feature. All they have to do is set their phone number in the Windows Store account.

As the name implies, carrier billing allows users to bypass the usual payment methods like a credit card or PayPal. Instead they’re free to buy content and pay for it directly on the phone bill. This method of payment was popularized in developing markets where spotty internet and small credit card penetration made it an attractive option.

However, in recent months, carrier billing has been continuously expanding even in developing markets. As mentioned, Microsoft has continued to develop its partnerships with Boku and other companies in different parts of the world. Boku’s CEO, Jon Prideaux explained the move:

Microsoft is a superb partner for Boku, and our relationship has been made even stronger with the addition of UK and Italy. In a matter of months, our agreement with Microsoft has expanded from one major developed market, to five, and is available on all Windows 10 devices; from phones and tablets, to desktop computers. This rapid expansion, with much more to come, is proof positive that carrier billing is becoming the world’s preferred alternative payment, regardless of consumer access to credit or bank cards.

But the Windows maker isn’t the only one doing so. Google, Apple and others are also offering carrier billing in more and more markets as a convenient alternative to traditional payment methods.

Given the growing popularity of this payment method, we’re bound to see more support for new markets and new carriers in the months ahead.