Microsoft cut the price of the 32 GB version of the Surface RT tablet down to $349 just a few weeks ago. Before that happened, Microsoft offered to sell the Windows RT device to qualified K-12 schools and colleges for just $199 each until August 31st. 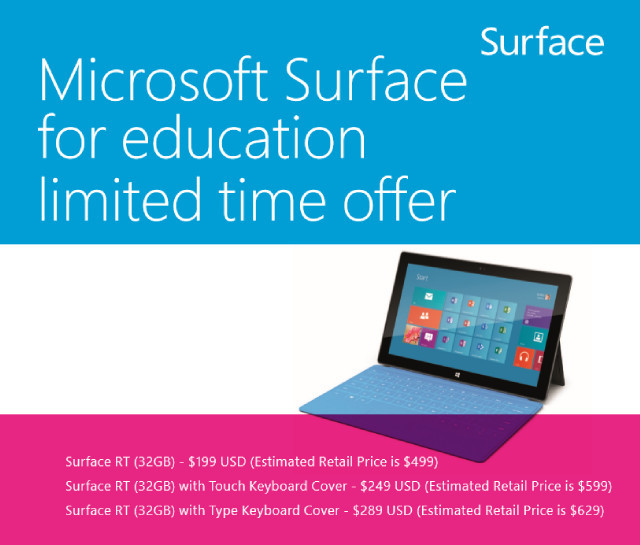 Although that date is now just a few weeks away, Microsoft has now elected to extend that Surface RT $199 offer to schools for a few more weeks. ZDNet.com got a statement from Microsoft which stated:

Thanks to great customer interest, we are thrilled to share that this special offer to education institutions will continue until the end of September. Microsoft has a long tradition of supporting education institutions, and this offer is intended to get Surface in the hands of even more educators and students.

Just a reminder: This $199 offer is being made for schools and colleges to use, not directly to students, although the schools could then lend or let their students purchase the Surface RT tablets.. The discount also includes buying the Surface RT with a Touch Cover for just $249 or a Type Cover for $289. Besides the US, this discount is being offered in 24 other countries.