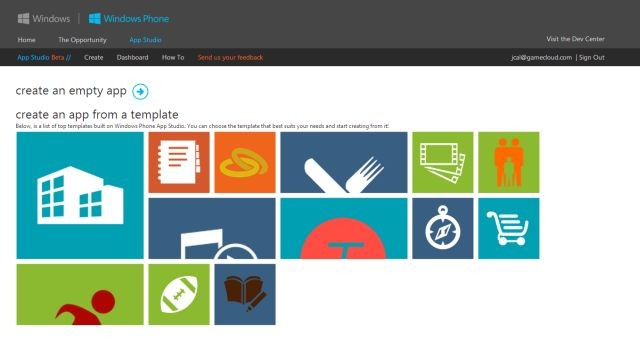 It's the dream of many people to build a mobile app that becomes a huge hit so they can retire off the revenues. However, actually making an app is something that usually requires some experience in coding and design. Today, Microsoft has revealed a way to create a Windows Phone app using a series of templates and with no coding experience needed.

The Windows Phone blog introduces the public beta version of the Windows Phone App Studio. This web-based system, which works best when using Internet Explorer 10, starts with a person signing onto their Microsoft Account and then picking from a series of templates. shown above. Those templates range from creating an online storefront to posting up personal movie reviews.

Once you select the template, you can then add images, videos, RSS and Twitter feeds and more to the app. After that, the system has a selection of colors, Live Tiles, splash screens and lock screens to choose from.

Microsoft adds that this new web tool is not just for beginners. It states:

More skilled developers ... can use the tool for rapid prototyping, and then export the code and continue working with the project in Visual Studio. Unlike other app creation tools, with Windows Phone App Studio a developer can download the source code for the app to enhance it using Visual Studio.

This is just the first version of Windows Phone App Studio and Microsoft says they will be adding more features, including many suggested by the first users of this system.