Microsoft has been constantly adding new features to its Bing search site since it first launched in 2009 as a direct competitor to Google. However, it hasn't made much of a dent in Google's overall search market share. Today, the company announced its biggest overhaul of Bing since it started over four years ago. The changes starts with a new logo:

In a post on the Bing blog, Microsoft said they created "hundreds of studies" for the new logo, along with making mock ads and billboards, before settling on the design above. The blog states:

The wordmark is a customized version of our corporate font Segoe. We retained the lowercase ‘b’ in tribute to our Bing logo heritage and to provide a slightly less obtrusive stance. The descender on the ‘g’ has been slightly modified to curve upward in a friendlier manner and the cut on the top of the ‘b’ mirrors the angle on the cut of the ‘t’ in our Microsoft logo. The kerning pairs of the ‘i’ and the ‘n’ are exactly the same as the ‘i’ and the ‘n’ in the Windows wordmark. The symbol, a stylized ‘b’, evokes a sense of movement, direction and energy. The color loosely pays tribute to the orange dot from the previous Bing logo while also fully embracing the Microsoft color palette and taking inspiration from one quadrant of the corporate flag logo.

Microsoft is not just giving Bing a new logo. In yet another blog post, it says that it will be rolling out changes in its interface in the near future, one that may turn search results into something like the design seen below: 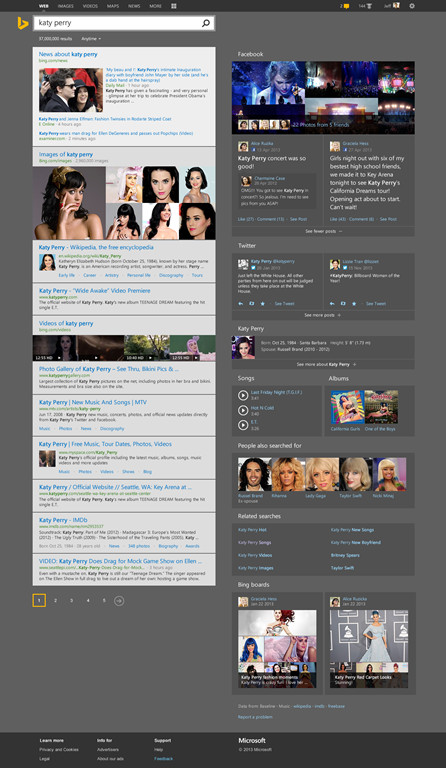 One change integrates the Snapshot information box with the Sidebar section, which lets a person see what his or her friends on Twitter and Facebook are talking about, in one section on the right side of the page. Microsoft offers an example how this will help search results by looking up information on a highway; the Snapshot section gives the facts, while the Sidebar section can offer things like user reviews, status updates, recent photos and more that are related to that highway. 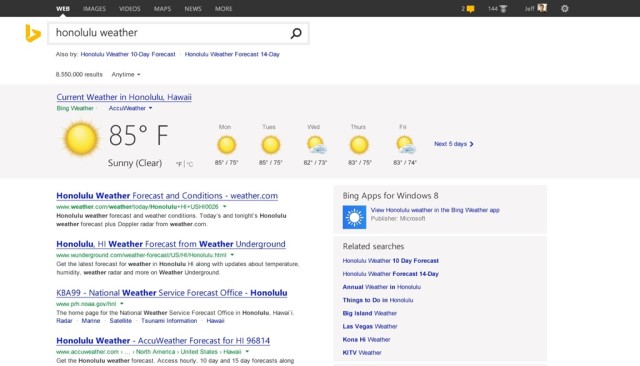 Another new addition is Page Zero, where typing in a search string will start to show information even before a person clicks on the "search" button. Microsoft has also put in what it calls "Pole Position", which shows information on top of a page about a search string that the Bing algorithms have "high confidence" about. The blog states:

When we know that someone wants images of a celebrity, is looking for a specific fact or needs a detailed view of the weather in a particular city, we now provide a much larger answer beautifully integrated at the top of the page.

Finally, the Bing website will adapt to different devices and displays so that it can offer the best interface for each user. Stefan Weitz, a Microsoft senior director of search, told the Wall Street Journal that the company " ... went back to the drawing board about how to build searches." We will have to see if a new logo and these new additions will help to bring more Google users to the Bing fold.