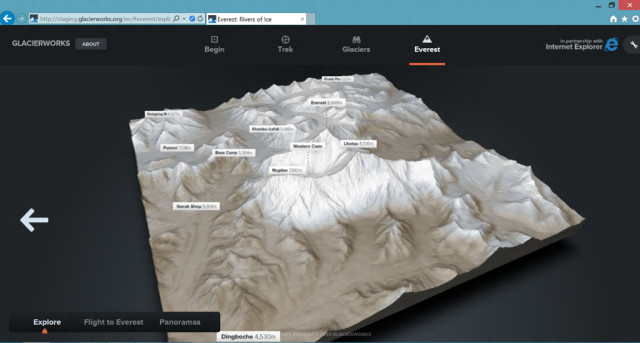 As the launch of Windows 8.1 gets closer and closer to its official October 18th introduction, Microsoft continues to give the general public a better look at what the OS update will bring to PC owners. This week, the company released an overview of what Windows 8.1 will have in terms of supporting Internet Explorer 11.

Microsoft's blog post goes over much of what has been revealed before about IE11, including the fact that it now supports WebGL for GPU accelerated web graphics such as the image above, which depicts the Mount Everest region of the world in full 3D. It can also have up to 100 tabs open without draining performance or the battery life on a notebook PC.

One new feature that perhaps has not gotten as much attention is the fact that IE11 allows Windows 8.1 users to pin websites to the Start screen with Live tiles. The blog states:

With Windows 8.1, your pinned sites can now be alive with activity, pulling data directly from the website's RSS feed so your Start screen is updated with the latest posts, scores or stocks – information from the Web right on your Start screen.

Web sites can actually put in some extra code quickly that's generated via a browser wizard so that when users create their own Live tiles with IE11 in Windows 8.1, they will get the full effect.