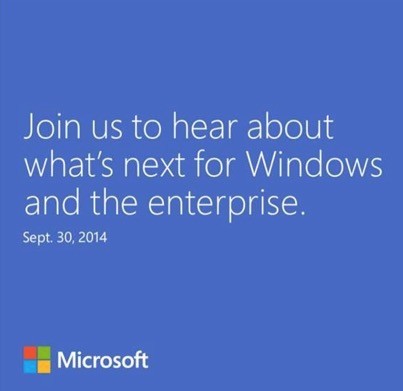 Microsoft has announced a press event for September 30th in San Francisco to talk about the next version of Windows. While the invite does not specifically call out Windows 9, it is fully believed that the company will be announcing its new operating system at this event.

Currently referred to internally by the codename Windows Threshold, many, including ourselves, believe that Microsoft will call the project Windows 9.

A focus of the event will be about the enterprise too, which is not a surprise, considering the lack of enthusiasm from large corporations to deploy Windows 8. Look for Microsoft to talk directly to these partners about Windows 9 and how the specifically listened to enterprise feedback to build this version of Windows.

With the event a little over two weeks away, we won't have to wait long for Microsoft to talk about all the new features that are coming to the platform.