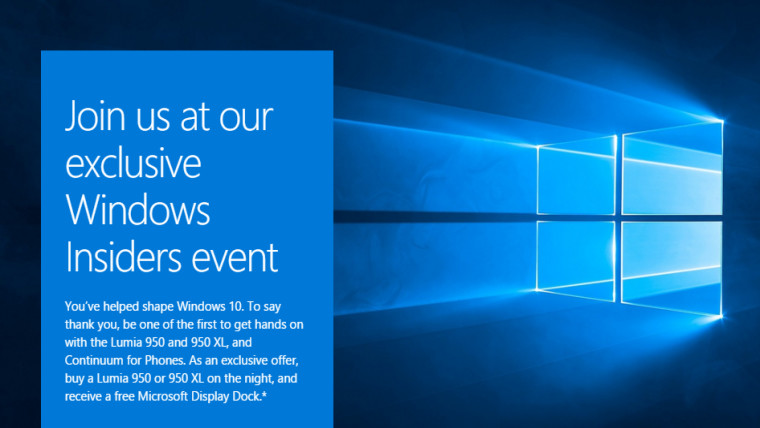 Microsoft's new Lumia 950 has already gone on sale in the United States, and its larger sibling, the Lumia 950 XL, will begin shipping there this week for those who pre-ordered it. To celebrate the US launch of its new Windows 10 Mobile flagships, Microsoft is inviting Windows Insiders to join the company at two exclusive events on December 1.

Insiders in the US will be receiving emails similar to the one shown here, offering the choice of attending events in either New York City, or Bellevue, Washington. The events sound similar to those being held in other parts of the world, including in the British cities of London and Manchester.

Those who wish to attend must sign up to apply for a place; Microsoft warns that spaces are limited, and applicants will be notified later if they've been successful in securing a spot.

Attendees will be able to buy a Lumia 950 or 950 XL on the night, and those who do will go home with a free Microsoft Display Dock, worth $99. However, while those who buy on the night at the UK events will also get a free Office 365 subscription, that doesn't appear to be part of the package for the US launches.