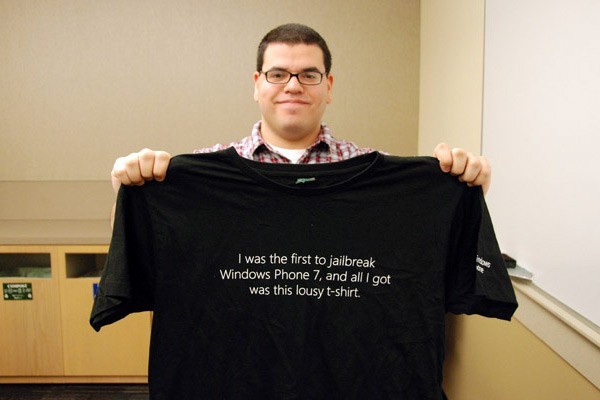 A group by the name of ChevronWP7 has already created the first jailbreak for Microsoft's WP7. Microsoft even went so far as to sit down and meet with the group giving them t-shirts to memorialize the event. Now Brandon Watson, WP7 director, tweeted "#geohot if you want to build cool stuff on #wp7, send me email and the team will give you a phone - let dev creativity flourish #wp7dev"

On the bright side George Hotz (Geohot) can work on WP7 without worrying about adding to his legal dilemmas. Sony is currently suing Hotz for offering the jailbreak for the PS3, the judge has currently delayed ruling on the case. Apple is also trying to find ways to end jailbreaking on their devices, according to NetworkWorld Apple said

Current jailbreak technologies now in widespread use utilize unauthorized modifications to the copyrighted bootloader and operating system, resulting in the infringement of the copyrights in those programs.