According to a new report released today, Google will soon launch a new site aimed at offering discounts to online buyers following the unsuccessful push to acquire discount giant Groupon just months ago.

Based around the idea of popular discount site Groupon, the site, which is expected to be called Google Offers and was discovered by Mashable earlier today, will allow online users to purchase products from retailers for a cheaper, discounted price.

“Google Offers is a new product to help potential customers and clientele find great deals in their area through a daily email,” information uncovered by Mashable suggests.

It's thought Google Offers will be integrated with social networking sites such as Facebook and Twitter, and will also support Google's Checkout service as a way for users to purchase the discount deals. According to the confidential document, businesses interested in offering a deal can get started in five easy steps, namely creating the offer, marketing the offer, run your offer, collect your money and then serve your customers, who'll arrive at stores with printed vouchers for the deal.

In a statement released later today following the Mashable report, a Google spokesperson acknowledged the existence of the site, saying it's part of a drive at Google to connect businesses and customers using the Internet.

"Google is communicating with small businesses to enlist their support and participation in a test of a pre-paid offers/vouchers program. This initiative is part of an ongoing effort at Google to make new products, such as the recent Offer Ads beta, that connect businesses with customers in new ways," a spokesperson for the search giant said in a statement. 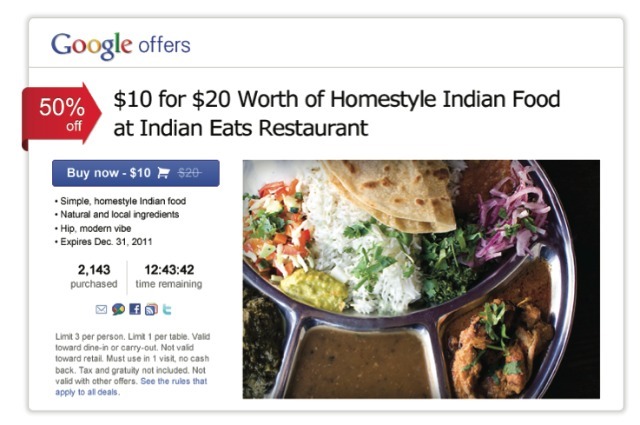