While the Wikipedia site has its own official Windows 8.1 app, it appears that Microsoft is trying to offer its own version with something extra: Bing. This week, the company released what it calls the Bing Wikipedia Browser that combines all of the content in the massive user-created encyclopedia site with Microsoft's Bing search engine features. 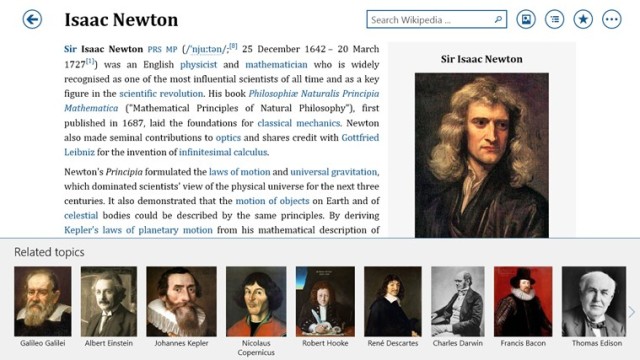 The app, now available for download on the Windows Store, allows users to search for content on the Wikipedia data base, but adds an extra "Related topics" bar below each entry. As the screenshot above shows, viewing the Wikipedia entry on Isaac Newton also gives people a chance to view and click on entries about other famous scientists.

Any images that might be included in a Wikipedia page can be clicked on in the Bing Wikipedia Browser so they can be seen in the separate image viewer. If there's more than one photo, the user can flip through them inside the image viewer. If an entry has more than one sub-section, the browser can also bring up an article's table of contents so that users can quickly access which section they wish to read.  Finally, articles in the app can be quickly shared with others.

Microsoft is clearly trying to combine items it uses in its own Bing Snapshot database with Wikipedia in this new app mashup. It certainly offers some features that power Wikipedia users would appreciate.