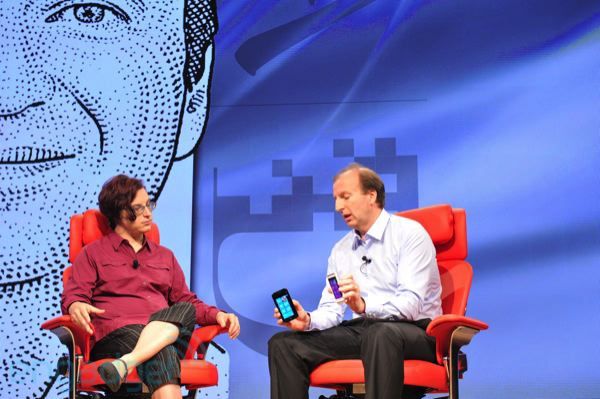 Microsoft never likes to be left out of an announcement, and sure enough, while the Galaxy Nexus announcement was going on last night, Steve Ballmer just happened to be doing an interview for AllThingsD Asia and happened to be saying not very nice things about Android.

​​Anyway, ​according to Engadget, Andy Lees, president of Windows Phone said today that "Android is very techy" and that Microsoft pursued a "people approach" with Windows Phone. He said in regards to Microsoft's sometimes slow hardware choices that;

"[Microsoft] wanted to stop problems with fragmentation, so we've locked a lot of things down. We want partners to add value, but not in a way that's chaotic. As an example, we do hardware acceleration of the browser -- no matter which WP device you choose, it all works in a consistent way. Some things in 2012 will extend that."

Fair enough. And what he means by that, is that NFC will be shipping on phones within a year, apparently. According to Lees, Microsoft isn't interested in competing from Google or Apple, and is happy to work with mobile payment services that already exist, rather than re-invent the wheel.

According to Lees, "Microsoft is providing technological building blocks so payments can be done on the phone -- we aren't competing with other people providing services. We'll have a platform approach."

LTE is also coming to Windows Phone, according to Engadget, "as the infrastructure evolves."

Andy did have something to say about Siri, too. He thinks that it's not "super useful" and (strangely) pointed out that WP7's voice implementations rely on Bing (even though Siri is connected to Wolfram Alpha, so it's not really different).

We suspect that Nokia might bring some NFC-related goodness to the platform next week at Nokia World, considering the "Sea Ray" device is pretty closely related to the N9 that features NFC. However, at this point, it's anyones guess.