Yesterday, we reported that Asus is rolling out Windows 11 support on its PCs having the 6th- and 7th-gen Intel processors. However, there was no mention of it in the official list from Microsoft. Finally, Microsoft has announced its updated list of CPUs that support Windows 11.

The new list includes Intel's 7th-gen Core X-series chips, Xeon W-series processors, and the Core i7-7820HQ chip that was used on the Surface Studio 2. However, devices with the Intel Core i7-7820HQ processor will also need to support Microsoft's DCH design principles, else they will not be eligible for the Windows 11 update. As for Intel Xeon W-Series chips, the company hasn't yet specified which ones will be supported. Unfortunately, there won't be any more AMD chips added to the list.

Microsoft says that the new requirements are needed to "harness the true value and power of the PC to deliver the best experiences, now and in the future". To do so, it formalizes the following principles:

Security: Windows 11 raises the bar for security by requiring hardware that can enable protections like Windows Hello, Device Encryption, virtualization-based security (VBS), hypervisor-protected code integrity (HVCI) and Secure Boot. The combination of these features has been shown to reduce malware by 60% on tested devices. To meet the principle, all Windows 11 supported CPUs have an embedded TPM, support secure boot, and support VBS and specific VBS capabilities.

Reliability: Devices upgraded to Windows 11 will be in a supported and reliable state. By choosing CPUs that have adopted the new Windows Driver model and are supported by our OEM and silicon partners who are achieving a 99.8% crash free experience.

Compatibility: Windows 11 is designed to be compatible with the apps you use. It has the fundamentals of >1GHz, 2-core processors, 4GB memory, and 64GB of storage, aligning with our minimum system requirements for Office and Microsoft Teams.

Microsoft has also updated its PC Health Check app which now sheds more light on what the issue is for devices that are incompatible. For instance, if your PC is lacking TPM 2.0 or if it's running an old processor, the app will mention it. The app is now available for Insiders to download and will be released to more users in the coming weeks. 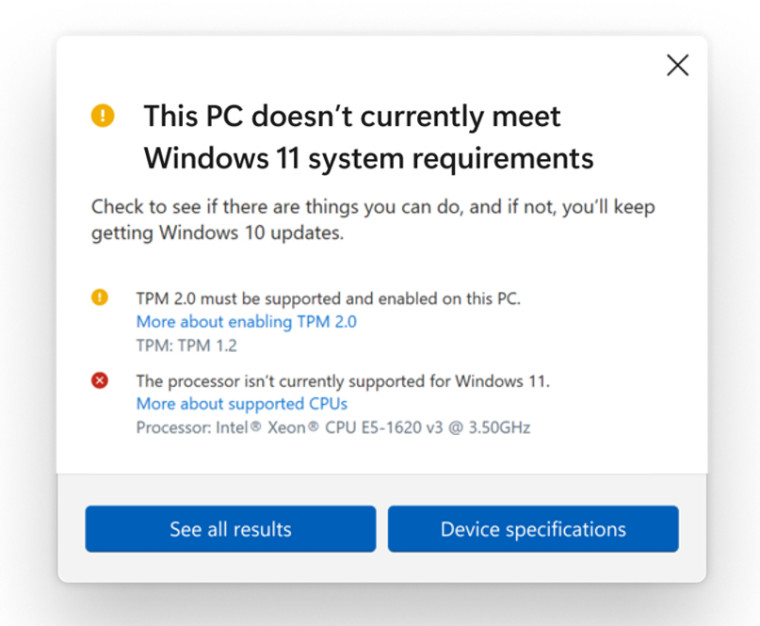 As shown above, the eligibility check functionality in the PC Health Check app now includes improved messaging on eligibility and links to relevant support articles that include potential remediation steps. Finally, Microsoft says that it has learned a lot while adding support for more CPUs to its list, while also thanking the Windows Insiders for providing feedback and making it happen.

While not much in the way of processor requirements have changed, the company will supposedly let enthusiasts install Windows 11 on unsupported silicon, which will be a welcome addition for Insiders and others who are aware of the issues and want to still go ahead with trying out the new OS.