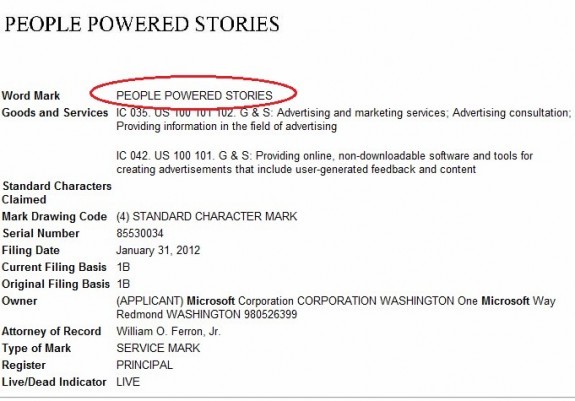 Social media can be the most powerful way to advertise, and Microsoft is preparing to capitalize on this. The company filed a trademarkfor 'People Powered Stories', and as Fusible reports, they could receive the right to use the term exclusively.

Microsoft is not a stranger to advertising through social media. At present the company is running the #droidrage campaign, in a move targeting Google's Android operating system, with the promise of Windows Phone devices being given out to a few people who have used the hashtag. Now, they're planning to take it a step further, possibly in response to changes in Google's policy. Whatever their need for the trademark, Microsoft is clearly interested in pushing social media marketing further.

Users are the most important part of a technology company's success, and social media can be a fantastic driving force - for better, or for worse. McDonalds discovered this recently, though it seems probable Microsoft will have a better result with the People Powered Stories concept. The concept can be taken and made very broad, covering all of Microsoft's services, or it could be used to specify opponents and display some challenges to them (such as Google's aforementioned mobile operating system).

The domain PeoplePoweredStories.com has been supposedly registered in China, though this may be an enterprising individual readying themselves in the hope of a large cash sum for domain parking. This can work for some people, and can fall apart for others, such as during Netflix's short-lived plan for a service called Qwikster during 2011.